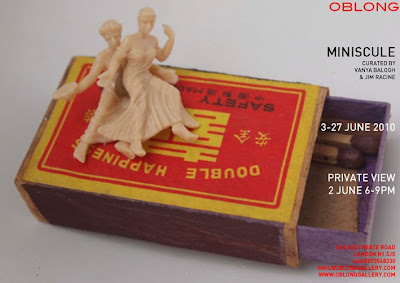 I always enjoy stumbling upon little artist-led galleries and art spaces in unexpected places. Last Sunday afternoon, when popping out for an ice-cream, I discovered Oblong Gallery – a tiny contemporary art space on Southgate Road in De Beauvoir, just round the corner from where I live.

The exhibition on display was Miniscule, curated by Vanya Balogh and Jim Racin – a show of tiny artworks that describes itself as a “bijou social experiment”. I’m not sure that I’d go quite that far, but this tribute to thinking small was ideal for the space, which is itself a gallery in miniature.

A range of artists working in different media had been invited to submit “diminuitive objects” with the maximum size of a small matchbox (2” x 1.5”). Works on display included everything from drawings on Rizla papers to miniature found objects to tiny paintings.

Unfortunately Sunday was the final day that Miniscule was showing but if you want to check out Oblong Gallery, it looks like their forthcoming exhibition (Oblong Represents Group Show No. 2) opens in July. 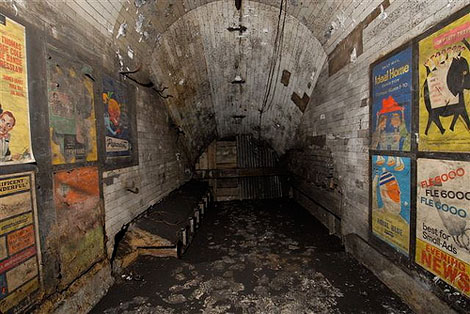 These fabulous old advertising posters were recently discovered during rennovation works at Notting Hill Gate underground station. The posters were uncovered in an old lift passageway, and date from c. 1956-1959, when the station’s lifts were removed and replaced by escalators.

London Underground will be leaving the posters intact, but they are unfortunately inaccessible to the public. However you can view lots more photographs of this treasure trove of design history on Flickr here. 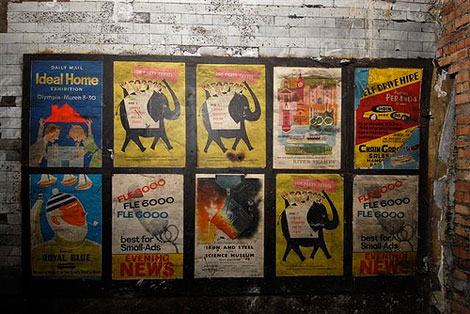 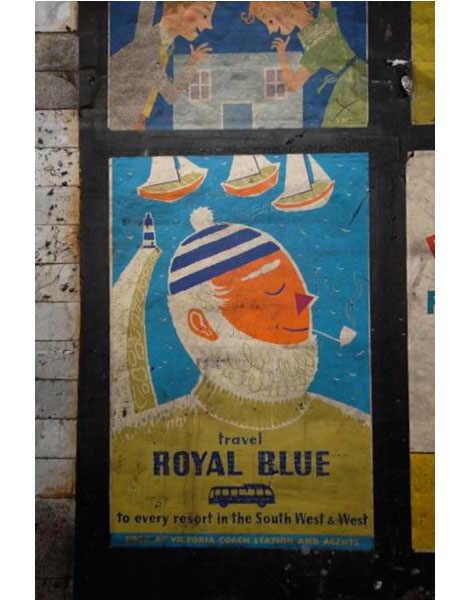 [all images via London Underground] In some ways, it’s a surprise that Stoke Newington didn’t already have a lit fest of its own: it makes the ideal location for literary events. Stoke Newington Church Street is replete with kooky cafes perfect for reading paperbacks and drinking coffee; it has an independent bookshop, and a spooky graveyard (the fabulous Abney Park) with a ruined church that’s straight out of a Victorian ghost story; and it also has a long history of connections with literary figures and radical thinkers – past residents have included Daniel Defoe (who even has a pub named after him), Edgar Allan Poe and Mary Wollstonecraft.

The programme for this first festival was certainly diverse, incorporating everyone from A.C Grayling to Tony Benn, and covering topics ranging from feminism through to guerrilla gardening. On Saturday afternoon, I went along to an event featuring two of Britain’s leading science fiction writers in conversation – China Mieville (swoon!) and John Courtenay Grimwood – which took place at Stoke Newington’s Assembly Rooms, under the rather incongruous sparkle of an enormous glitter ball. Although holding the event without a chair to direct the conversation meant that discussion felt quite unstructured, this was a genuinely fascinating event – entertaining, thought-provoking and inspiring.

Then on Sunday afternoon, after a picnic in Abney Park, I went along to one of the festival’s headline events – Hackney resident Iain Sinclair talking to Andy Beckett, author of When the Lights Went Out: Britain in the Seventies. Unsurprisingly there was much discussion of London on the agenda, and the localities of Stoke Newington and Hackney in particular, but the tone was far from self-congratulatory: Sinclair brought a good serving of local controversy to the table (see the full story of the cancellation of his book launch at Stoke Newington library here and here), and there were also entertaining readings on offer from both writers.

Altogether, a pretty good start for Stoke Newington’s first ever literary festival – and the beer was tasty too! Check out the review in the Times here. June’s Late at Tate Britain was hosted by Grizedale Arts. This event told the tale of Grizedale’s ten-year transititon from sculpture park to radical arts organisation pioneering new approaches to artistic production and reception through a programme of out of the ordinary artists’ residencies, events and social projects from their base in the Lake District National Park.

This is a story that particularly resonates with me, perhaps largely because I had the opportunity to witness it at close quarters: from walking the sculpture park as a child (and occasionally creating our own Goldsworthy-inspired mini works of land art); to more recently, the chance to take a look at the redevelopment of the Lawson Park site.

The Tate event did a good job of reflecting Grizedale’s idiosyncratic and uncompromising programme, relating its story through re-enacting a range of artists’ performances alongside music, drama, film, dancing and food. Bringing together a pleasing mish-mash of projects, ranging from Souped Up Urn (a tea urn created by Jeremy Deller and Alan Kane) offering tea on the lawn, to Harold Offeh performing Crow, a mesmeric wedding dance, dressed as a gigantic bird; and from Juneau Projects serving up live music and chat beneath strings of coloured bunting, to sculptor Pablo Bronstein selling crisps; the event was also a clever and frequently entertaining presentation of the hazards, as well as the highlights, of socially engaged practice – the “pitfalls and pratfalls” of this approach to art. Part village fete, part live art performance, this event was just as weird and wonderful as I might have expected.

[After discussions with both Tate and with performers from Egremont, a community that Grizedale Arts have worked with over many years , it was decided that the evening’s performances should go ahead in spite of the tragic events which took place in West Cumbria last Wednesday.]

Find out more about Grizedale here or read about their new book Adding Complexity to Confusion.

As a long-time diary aficionado, I couldn’t resist the chance to take a peep at Ctrl.Alt.Shift‘s Dear Diary, which ran for two weeks in May at Super Superficial’s Gallery 7.

In a little room in the basement of a Covent Garden shop, this tiny exhibition offered up a selection of written and audio diaries from young people from all over the world, ranging from the visual journals of Dan Eldon, a young photojournalist who was killed on the front line by an angry mob in Mogadishu at the age of 22, to musings from Kurt Cobain, Anais Nin and Sylvia Plath. Extracts written by teenage Kenyans living in a context of extreme poverty, violence and political instability were side-by-side with the unpublished diaries of ordinary British people, collected by the British Library’s Irving Finkel. A comfy chair in the corner provided a space to browse a bookshelf of famous diaries and journals, and to jot down your own diary entry to add to the selection on offer.

The exhibition was complemented by an aptly-named event, Cringe at Hoxton Hall, which saw the theatre transformed into an 80s-style teenage bedroom complete with pin-up posters and The Breakfast Club playing on a TV screen. Readers from Henry Holland to Brett Anderson read extracts from their own or others’ diaries seated on a bed strewn with copies of Just Seventeen, Smash Hits and Jackie, accompanied by music from Jodie Harsh and Matt Horne. As a part of the project, Ctrl.Alt.Shift have also launched a limited-edition diary, with a cover illustrated by Alexa Chung and featuring extracts from Courtney Love, Daniel Johnson and Anais Nin, with all proceeds going towards work with young people from the slums of Nairobi.

Blending the entertainingly kitsch and toe-curlingly self-indulgent with some serious questions about how diaries of all kinds help young people to deal with even the most traumatic experiences, and resonating with Ctrl.Alt.Shift’s wider purpose as a movement fighting social and global injustice, Dear Diary was an enjoyable and sometimes thought-provoking little show. However I was left feeling that this was really just the tip of the iceberg – for me at least, this fascinating and rich literary form has lots of interesting depths still to be explored.