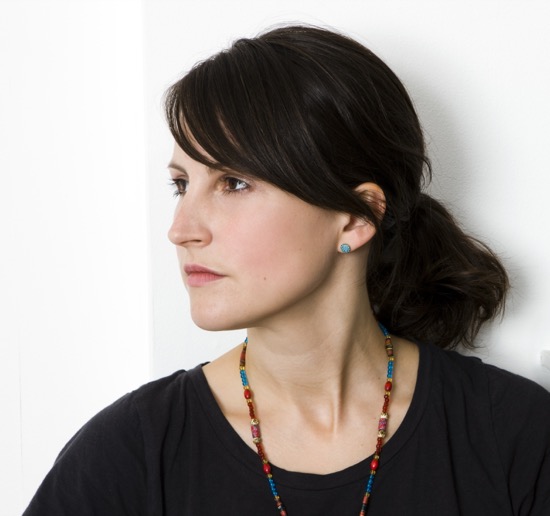 This interview was originally published on the Book Trust website http://www.booktrust.org.uk

I talked  to the multi-talented Julie Mayhew – actress, writer of plays and short stories, and now novelist  – about her debut book for young adults, Red Ink

‘Novels are like jigsaw puzzles. You have all these bits and pieces, and they suddenly start joining together, and you can’t work out where it all came from.’

I’ve come to meet Julie Mayhew at the Kings Arms in Berkhamsted, where in just a short time she’ll be celebrating the launch of her first novel, Red Ink, with a crowd of friends, fellow authors and publishing folk – not to mention a bit of Greek music and dancing and a melon-flavoured cocktail or two.

This is, of course, perfectly in keeping with Mayhew’s book – the story of 15-year-old Melon Fouraki, who has been raised on her mother’s magical stories of her halcyon childhood in Crete. When her mother is suddenly run down by a London bus, Melon is left suddenly alone in the world. Struggling to cope with her loss, Melon begins to confront her own childhood memories, and her quest to discover the truth takes her back to Crete, where she soon realises that the cherished family myths may not be all that she has been led to believe.

Challenging, uncompromising, and already attracting praise from critics, there’s no doubt Red Ink is a distinctly different young adult novel, so I’m keen to know how the idea came about.  Mayhew explains: ‘The first spark for Red Ink came when I was in Crete. There was a truck in front of us with melons piled in a pyramid. There was no tarpaulin, and we were driving behind for ages thinking: “how aren’t those melons falling?”

‘Then, I was doing a writing course, and the teacher made us do this exercise where you wrote in a spiral. He told us to write down the first word that came into our heads, and weirdly, I wrote “melon” – I don’t know whether it was connected. I wrote the scene where Melon is trying on bras in M&S and her mum is having a cigarette in the changing room, and it became the second piece of the jigsaw puzzle.

‘I didn’t do anything with it for ages. The real spur was having my first son, and it made me think again about what it is to be a parent. You always think your own mum and dad are perfect: they do no wrong and almost they aren’t human. Then when you have your own children, you realise parents are utterly flawed and can make horrendous mistakes. That was what I was interested in – looking at that from both sides.  Melon thinks her mum is just a nightmare, but actually Maria is doing her best in a bad situation, although it’s sometimes a bit misjudged.’

Central to Red Ink is ‘The Story’ – Melon’s mother’s semi-magical, mythological tales of the Fourakis family in Crete: ‘I’m really fascinated by the stories in families that get told time and time again. Details get changed, or slightly exaggerated. But does it matter if we tell the truth? I’m fascinated by that: is it even possible to tell the truth, or can you only tell your truth, your version?’

Writing the book called for a return to Crete to research the island and its traditions, although Mayhew acknowledges that this process had its pitfalls: ‘I wanted to put in lots of things that I had found out, but I ended up editing it a lot, because I realised I had forgotten to tell the story: the book was becoming a postcard from me about my trip to Greece. But there were some lovely things I found out about, like the root stock tree which is half lemons and half oranges. I even read a book about melon farming, so the descriptions of the bugs that attack the melons are accurate.’

Ultimately though, research was only part of the picture. ‘I embellished lots of things. For a while I got wrapped up in the truth, but then I realised that “The Story” could be a kind of fairy-tale, and that was much more liberating.’

Mayhew readily admits that she had not originally envisaged Red Ink as being aimed at young adults, although it has a 15-year-old narrator. ‘I saw it as an adult book when I was writing it, but I can see that it crosses over…  It’s interesting what makes a book “young adult” and what makes it “adult”. When I was a teenager, I actually read a lot of adult books because when you’re a teenager you don’t want to be talked down to. I read Judy Blume and Sweet Valley High too, but it was all very light and fluffy – if you wanted anything with grit or substance, you had to look elsewhere. I read a lot of Stephen King, and found all the dark, psychological stuff fascinating. I read Margaret Atwood as well – she had a really strong sense of what it was to be a woman that wasn’t just about chasing boys.’

Deciding that the book would be for young adults, however, did not limit the story, which deals with some difficult subjects and is shot through with black comedy. ‘I wrote about whatever I felt needed to happen. It does go to dark places, but it’s not written in a very direct way and it’s dealt with lyrically – you could almost pass over it and not know it’s happened at all. I’m not trying to shock.’

She thinks that her next book, Mother Tongue, will be for adults, although she admits that ‘my publisher is trying to persuade me that it might be “new adult”’. Like Red Ink, the book has a young female narrator and sets out to explore the limits of truth and fiction, but it is also primarily about language. ‘The main character can speak three languages by the end of the book, and it’s about how when you can’t express things in your language, they don’t really exist, because if you don’t talk about things, it’s almost as if they don’t exist anymore.’

Whilst Red Ink draws on Greek traditions, Mother Tongue has an 18-year-old Russian girl at its centre:

‘Red Ink had to be set in Greece, because Greece is all about myths and the islands have a fairy-tale quality. History goes back forever there.  This book is about not speaking about things, and I was interested in the idea that in Russia you could get in trouble for saying the wrong thing or for speaking when you shouldn’t. There’s a lack of expression, a cold front that I don’t think is really coldness: it’s just a cultural difference – you don’t go round grinning at strangers there. That fitted the story, which is all about keeping things in.’

Writing this novel has required a very different kind of research:  ‘I’ve got books and books of Russian idioms, and I’ve also been collecting untranslatable words – phrases for things like “being happy about beauty” that we don’t have a word for in English. There are lots of Russian words that are completely untranslatable. My character is also fascinated by proverbs, especially Yiddish proverbs. I’ve been trying to teach myself Russian too, but it’s hard – I’ve just about taught myself the numbers one to ten, but the Cyrillic alphabet is so difficult.’

Mayhew is very definitely a writer of many talents: having originally trained as a journalist, she went on to work as an actor, and to write critically-acclaimed plays, radio dramas and short stories before writing Red Ink. However, it’s clear that these different elements of her work are closely interconnected: ‘I became a journalist realising I wanted to write, but it didn’t feel quite right. Then I was acting and that didn’t feel quite right either. I realised that it’s quite nice being someone else, but when you’re acting, you don’t get to choose who you are. When you’re writing, you can choose to go and be someone else – it’s all consuming. At the moment, in my head I’m an 18-year-old Russian girl. You find yourself acting the part. ’ Her experience of writing plays and short stories also feeds into her novels. ‘I like each chapter to be a “scene” – you can see it happen and there’s a resolution. Each one is a self-contained story.’

Asked about the advice she would give to aspiring writers, Mayhew is very clear: ‘You only get better if you keep doing it. You become a more astute writer as you go. You can procrastinate so much, but in the end you just have to do it. I’m guilty of it myself, but I know if you just do it – even if you write rubbish – it’s good compost for something else to grow from. You go back to it later, and it’s got something in it, even if it’s just a little nugget – the first piece of the jigsaw.’