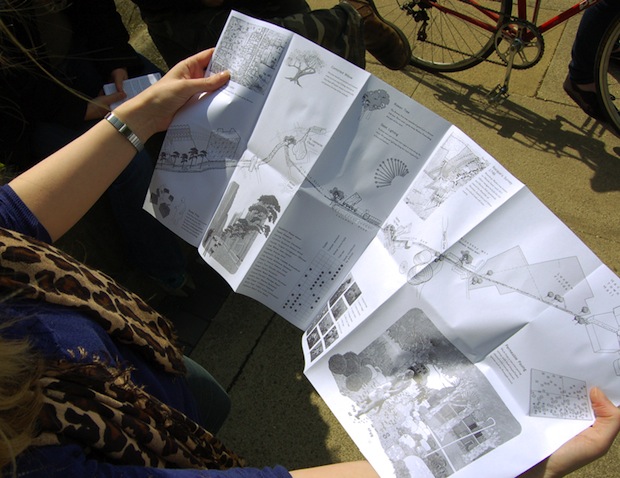 This Saturday I took to the streets of Hackney for a walking tour with a difference, hosted by my friends Misty and Howard.

The walk was part of a Landscape Institute series of walks and talks for the Chelsea Fringe, imagining what London might be like if we were to adopt a green infrastructure approach to development.

Howard and Misty’s walking tour was based on their shortlisted entry for the recent A High Line for London design competition run jointly by the Landscape Institute, Mayor of London and the Garden Museum and inspired by New York’s High Line. Their design focused on revitalising the ancient London Drovers’ Roads – the route used to move livestock from pasture to market between Hackney and Bishopsgate. From 1300 up until 1900 sheep, cows and even turkeys were driven from Wales and Scotland to London to be sold at market along these routes. 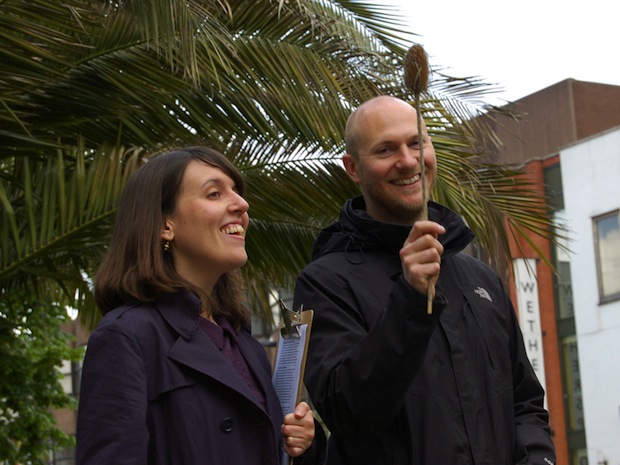 We met at Hackney Town Hall for the start of the walk, where Misty and Howard handed out some beautifully-designed maps they had created, complete with an envelope of seed bombs to be scattered along the route.

They spoke briefly about the ideas behind their design, and then asked us to imagine we were cattle that had been driven all the way from Scotland, stopping off to pasture on rich commons along the way. To start the walk, they led us off towards London Fields  holding a teasel aloft (far more appropriate than a tour guide’s umbrella). 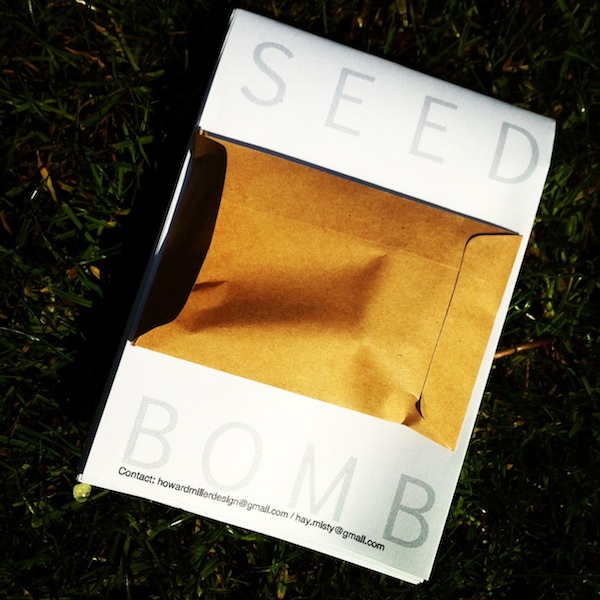 En route, Misty and Howard told us more about the history of the Drovers’ Roads, and the drovers themselves. Because of the difficult and highly responsible nature of their work, they were typically well-paid and well-respected members of the community. However their life on the road was tough, requiring them to walk hundreds of miles and sleep night after night in the open air: according to Sir Walter Scott, their diet would consist of little but some handfuls of oatmeal, onions and ‘a ram’s horn of whisky’.  They were also very superstitious: Scott describes how they tied knots in cows’ tails to protect them against witches’ curses. 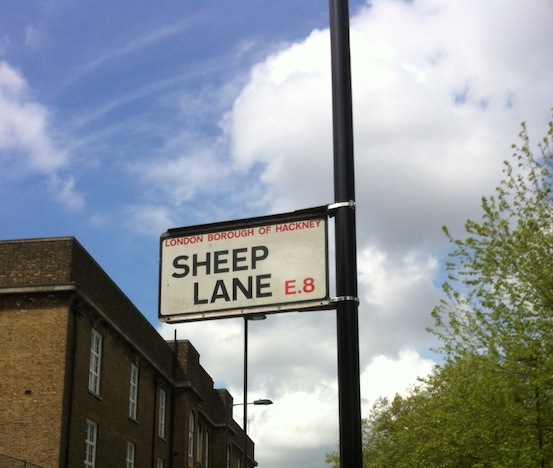 At London Fields, we had the chance to put our seed bombs to good use, as well as spotting some clear evidence of the Drovers’ Roads still to be seen London today: as well as this sign for ‘Sheep Lane’ we spotted ‘Lamb Lane’ and the ‘Cat & Mutton’ pub . We learned that Broadway Market itself was once called Mutton Lane because it was so frequently used by the drovers. 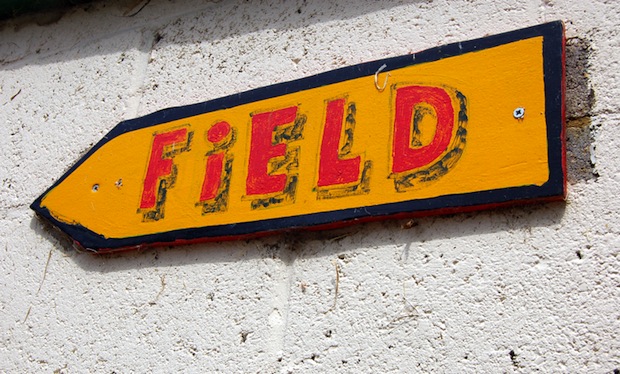 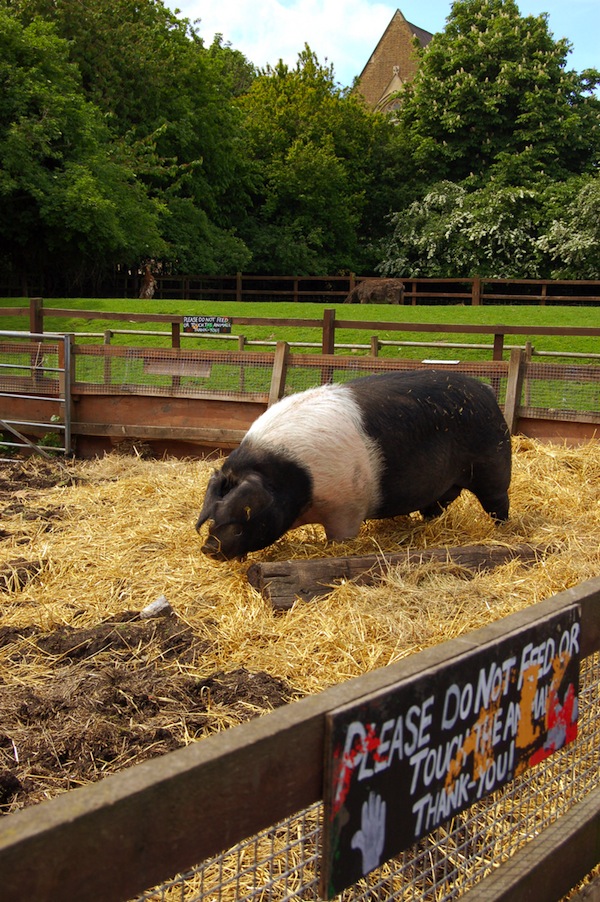 We stopped off at Hackney City Farm to see some real life livestock midway along the route, including this splendid pig, which gave Misty an opportunity to quote from an eighteenth-century essay,  the rather brilliantly titled ‘The graces and anxieties of pig keeping’:

‘A pig is sluggish, obstinate, opinionated, not very social and has no desire of seeing foreign parts. Think of him as a multitude forced to travel and wondering what the devil it is that drives him! Judge by this the talent of the drover!’ 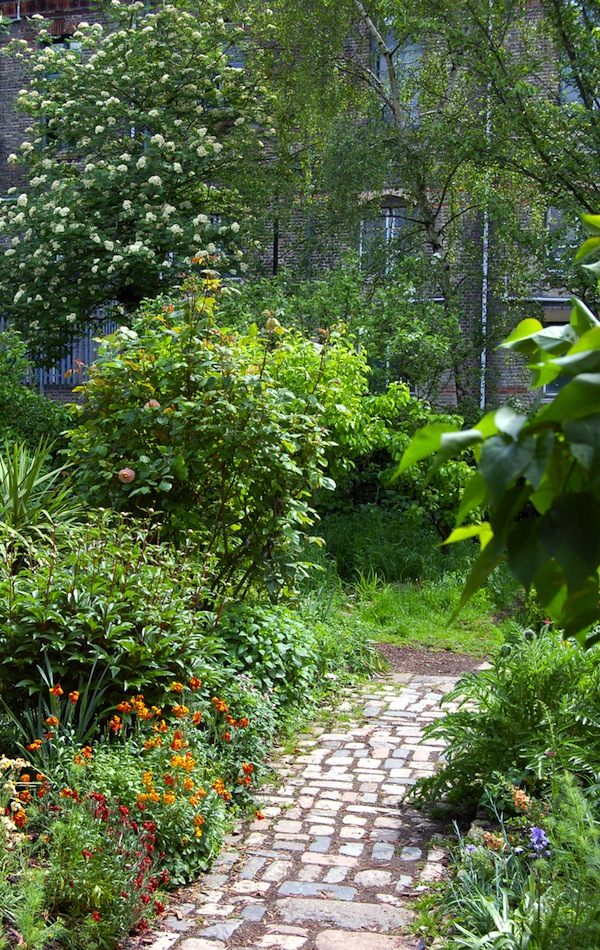 After a peep into the pretty Hackney City Farm garden, we were on our way again. 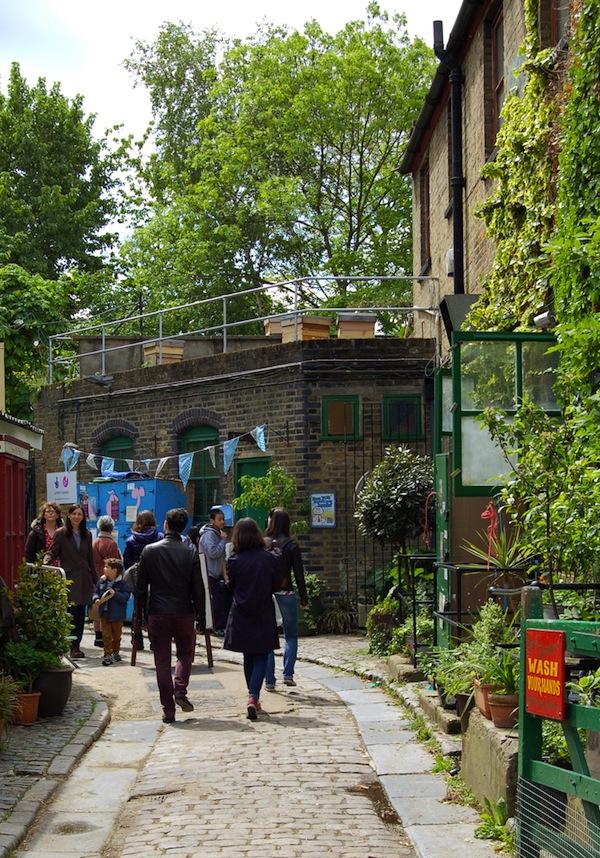 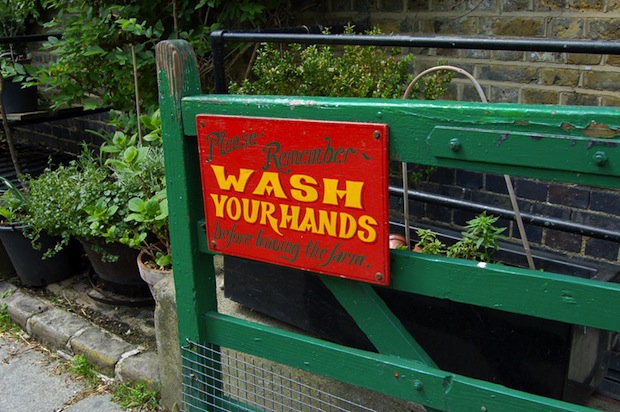 Following the drovers’ route took us along Columbia Road, where we stopped off for a quick coffee, and to admire some of the shop windows – as well as to meet a friendly local resident… 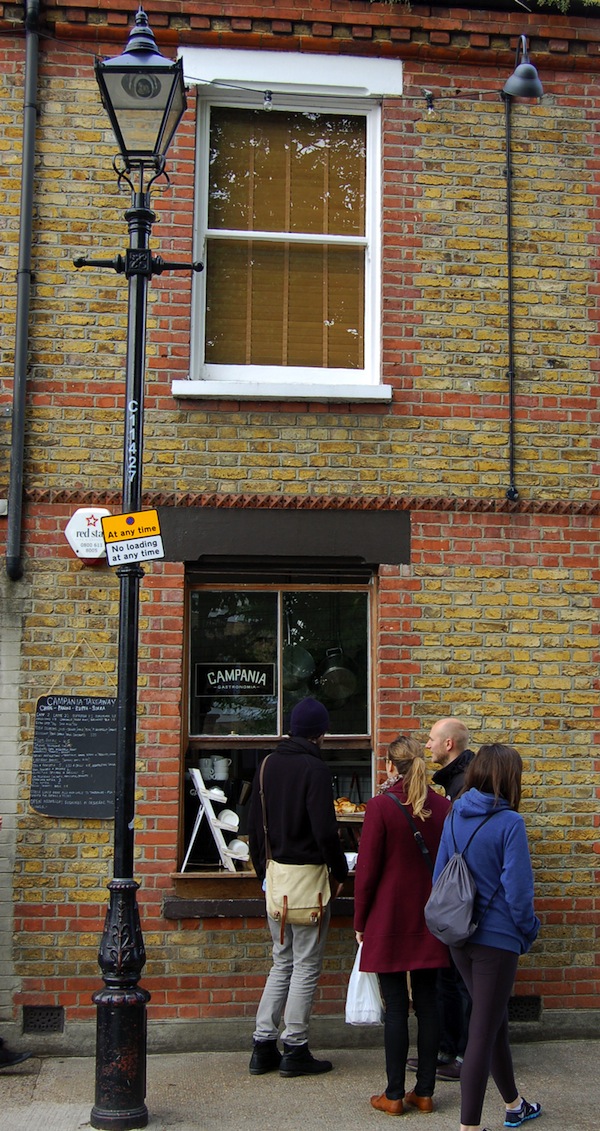 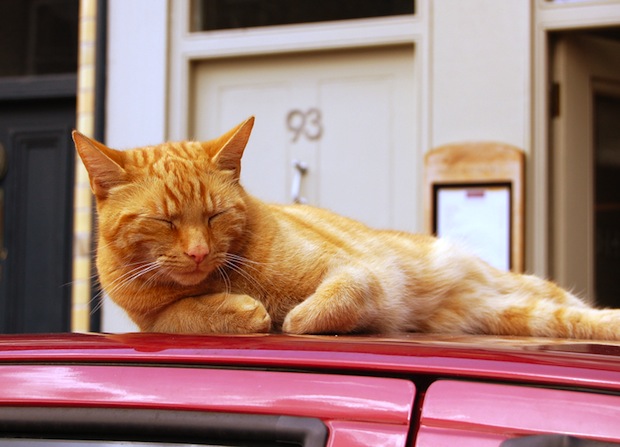 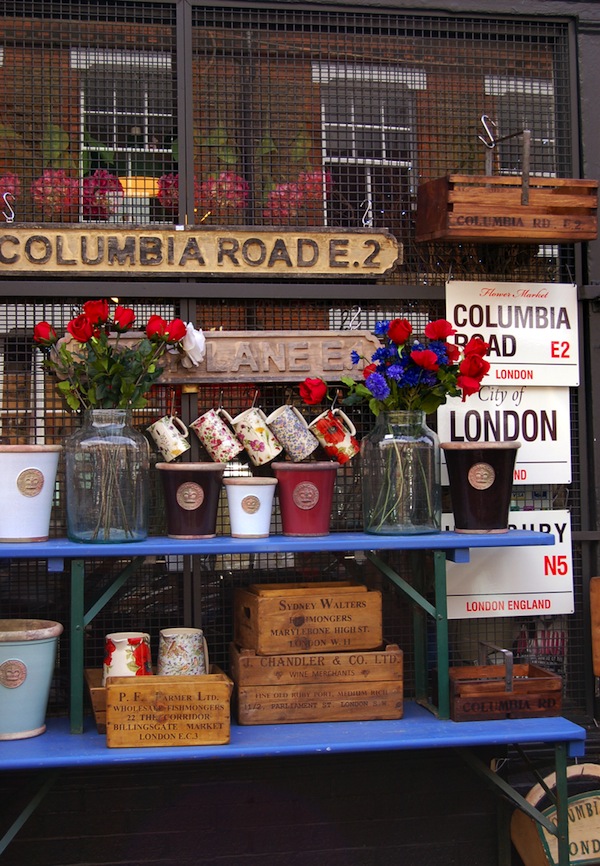 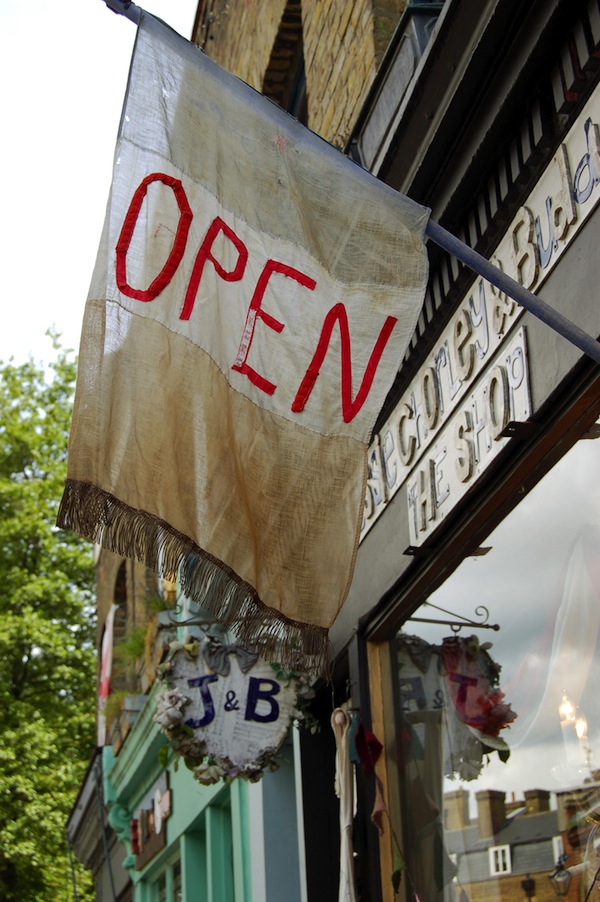 Misty and Howard told us more about their design for the competition as we went on: taking inspiration from the Drovers’ Route, it features permeable paving with hoof-shaped holes, planted with trample-tolerant plants; rowan trees (believed by the drovers to be lucky); and lighting in the trees inspired by the tail feathers of the turkeys that would once have roosted in the tree-tops. They’ve even chosen plants that could be used along the route, including plants that would have been used as fodder and those with animal names or folklore associations – Shepherd’s Purse, Lamb’s Ears, Cow Parsley, Cowslip, Cock’s Foot etc. Other plants selected have seeds that would have been transferred by the animals as they passed by. 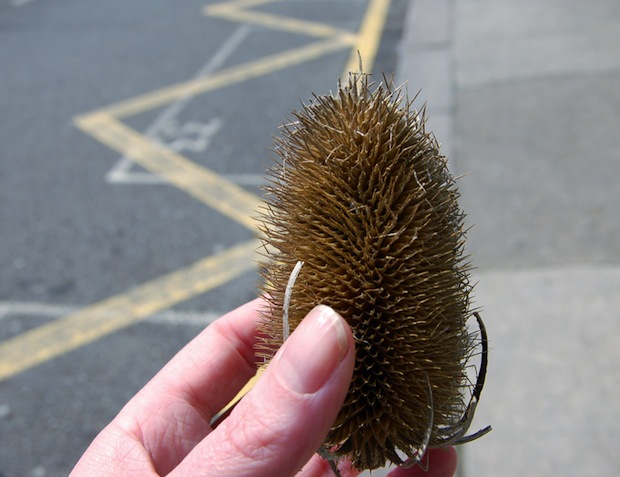 Almost as if we really were the animals ourselves, we were given some more seed bombs to scatter as well as some teasels, which made Woody the Boxer a bit excited: maybe he thought they were a bunch of hedgehogs he could play with? 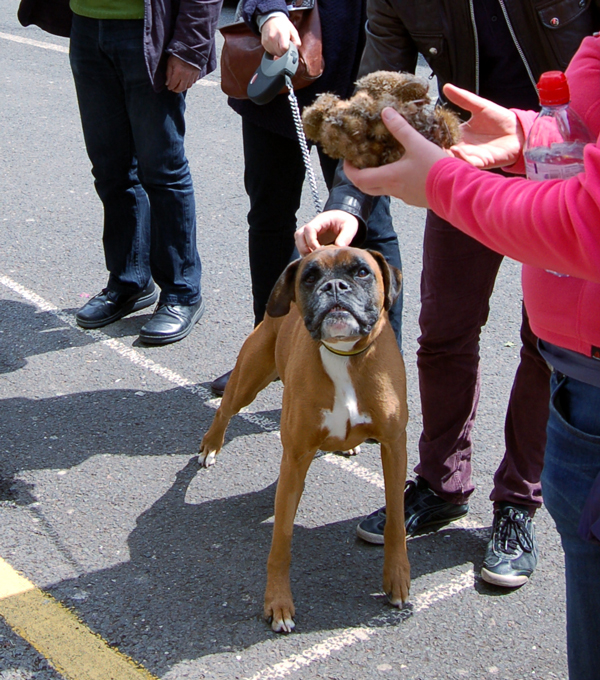 The last stages of the route took us past St Leonard’s Church and down Shoreditch High Street to Bishopsgate. These would be the final stages of the drovers’ journey, before the animals were taken to market and to slaughter: Misty and Howard had some gory descriptions to share of what conditions would have been like in the crowded marketplaces.

Just before Liverpool Street Station, the walking tour came to an end –  and the hungry drovers’ party went in search of some sustenance at the nearby Well & Bucket pub. Thankfully we managed something a bit better than oatmeal and onions… 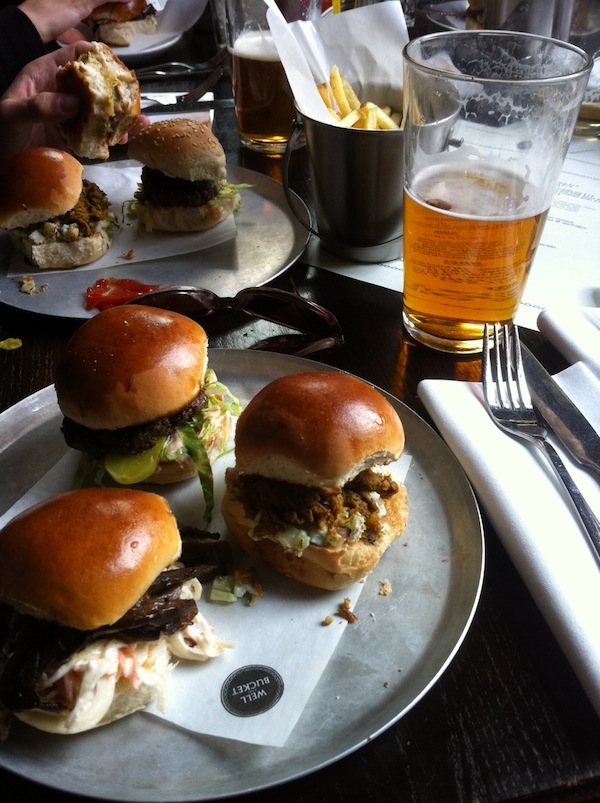 Thanks Misty and Howard for an intriguing morning – and the chance to see some familiar East London places in a new light.

Leave a reply to Diana Hale