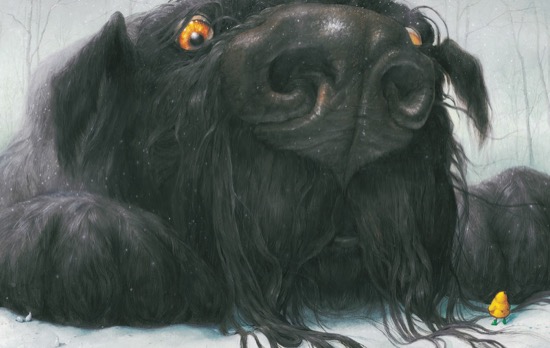 This interview was first published on the Book Trust website http://www.booktrust.org.uk

Levi Pinfold’s Black Dog is the winner of the 2013 CILIP Kate Greenaway Medal. I spoke to Levi about how it feels to win this prestigious prize.

‘I’m feeling great!’ Even though we’re only talking on the phone, it’s impossible to miss the fact that Levi Pinfold has a beaming smile on his face. He’s been named the 2013 winner of the CILIP Kate Greenaway Medal, which recognises excellence in illustration, for his second picture book Black Dog,  joining a list of winning illustrators that include Sir Quentin Blake, John Burningham, Helen Oxenbury, Shirley Hughes and Anthony Browne, to name but a few.

‘It’s a real honour,’ Pinfold tells me. ‘It’s a hugely personal thing for me. I worked for a very long year on Black Dog and it was very hard work – but very rewarding. It’s just amazing for someone to tell me that it’s good. It’s a real honour to be listed alongside all those fantastic illustrators… it’s really quite humbling.’

Pinfold takes a characteristically modest attitude to his book, which the judges identified as a ‘true modern classic’ that ‘will be read and enjoyed by generations to come.’ ‘I usually tend to downplay my work a little bit,’ he confesses. ‘I’ve looked at it for so long, but I hope maybe the judges could see the commitment that I put into it, and how hard I think about things…. You do put a lot of your personal feelings into books – subconsciously, it just trickles in there.’

Black Dog, which Pinfold wrote and illustrated, is story of a little girl called Small Hope who faces fear head-on in the form of a monstrous giant black dog – but she soon realises that it isn’t quite as frightening as everyone else seems to think.  Pinfold explains: ‘I wanted to write a ghost story: a spooky story for kids, with a gothic element. I was sitting in the library, reading a book about the spectral hounds of England, and I found this legend of the black dog, which is a recurrent myth in different counties of England, although in different areas it’s called different things. Usually it was this horrible thing that appears on the moors, and if you see it, something terrible will happen to you. Then I discovered one in Somerset that’s just called the “Gurt Dog” and the description was “he is a nice dog”. I thought that was quite a funny idea, and then I thought “what if he’s just been misunderstood in these other places? Maybe he’s just a lonely dog, wandering around.”’ His next book will also put a new spin on traditional legends. ‘I’m working on a book which should be out next year, which is about vegetables! It sounds very simple, but it’s actually about the Green Man myth, putting a little twist on the legend, and using those symbols in a new way.’

It is Pinfold’s distinctive illustrations which really set Black Dog apart – the Greenaway judges described as a ‘visual treat, full of mood and atmosphere’. Talking about his approach to illustration, he explains: ‘I take a long-term view of illustration and painting. I like to look at very old stuff as well as the most contemporary work. I’m hugely influenced by people like Brueghel as well as people like Shaun Tan and Anthony Browne – I have a very wide sphere of influence’. Thinking about why his style differs from that of many other contemporary picture book creators, he ponders: ‘I think perhaps the other thing is that I spend a lot of time locked up painting, so I don’t spend a lot of time going out and meeting other illustrators, so I don’t tend to get influenced by them. I just love painting and I love children’s books.’

Creating the beautiful, richly-detailed spreads in his picture books is something of a labour of love for Pinfold. ‘My process of creating illustrations is quite lengthy,’ he explains. ‘As for a lot of illustrators, it tends to begin in sketch form, then you produce a fairly detailed rough for your publisher. After that, what I do is I paint the illustration by hand. In Black Dog I used tempera – a kind of old-fashioned paint where you mix egg yolk with pigment. You layer up your painting over weeks. I don’t get bored… when I’m painting, when I’m exploring that world that I’m creating, that’s the moment when I think “this is what I’m meant to be doing”. I’m looking through the piece of paper, looking into it, and that’s what I enjoy.’ Thinking about this for a moment, he adds:  ‘It’s a nightmare for my publisher, I imagine – I’m busy “exploring the interior space” and they just want a book!’

Pinfold is not a newcomer to winning accolades for his work: Black Dog has already been awarded the Children’s Book Award in the AOI Illustration Awards 2013. His first picture book The Django won a Booktrust Early Years Award for Best Emerging Illustrator in 2010 and in the following year he was selected as one of ten Booktrust Best New Illustrators.  ‘It can be tremendously difficult when you’re starting out as an illustrator and trying to make a mark, and it really helped with awareness of my work, and the relationship with my publisher,’ he reflects. ‘Plus I got to meet the other illustrators – it’s great to see them doing stuff now. Winning those two awards was incredible for me. It’s been a wild ride ever since.’

Pinfold is using his Kate Greenaway Medal win as an opportunity to celebrate libraries and librarians across the country. ‘I’m honoured that my work has been recognised by CILIP on behalf of librarians, for whom I have nothing but respect. I am always amazed at the passion for reading, looking and understanding that libraries inspire in everyone. The availability of a whole universe of knowledge and inspiration in one place is something highly underrated, as is the importance of encouraging minds, young and old, on the pathway to discovery. I think we all have a lot to learn from libraries.’