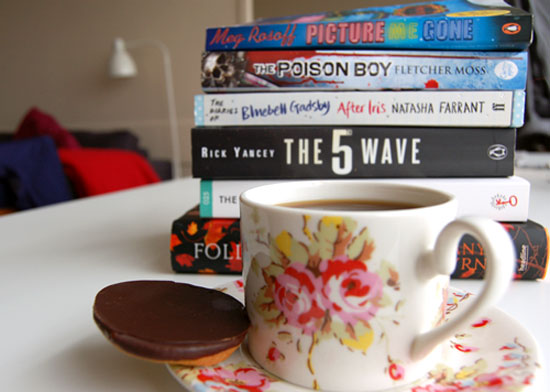 After a very busy few weeks, what could be nicer than a lazy Sunday to put my feet up, eat chocolate biscuits and catch up on some reading? Here are a few of the books I’ve been enjoying recently:

Picture Me Gone by Meg Rosoff

Rosoff’s latest novel comes out in September, coinciding with the release of the film of her first book How I Live Now, which I’m just a tiny bit excited about. This is the story of twelve-year-old Mila, who notices things that other people don’t, and who finds herself accompanying her father on a strange journey through New York State in search of an old friend who has mysteriously disappeared. I love Mila’s narrative voice and this beautifully understated novel is Rosoff at her best. (It doesn’t hurt that it also features a really brilliant dog.)

The Poison Boy by Fletcher Moss

It’s not hard to see why Fletcher Moss won the Times/Chicken House fiction competition with this unusual children’s adventure story. Dalton Fly is a poison boy, whose job is to taste the food and drink of Highlions’ rich and powerful to identify any traces of poison planted by their enemies. But when a job goes wrong, Dalton is in danger, and soon finds himself joining with some unlikely allies to tangle with the city’s complex, unstable politics and warring factions. There’s plenty of action and suspense on offer but what I liked best was the richly imaginative and distinctive world that Moss has created.(As an aside, I also can’t help but like the fact that as his pen name  – at least I assume it’s a pen name –  he’s chosen the name of a park in Didsbury, Manchester, where I spent a lot of time running around as a child.)

After Iris by Natasha Farrant

There’s something reminiscent of Hilary McKay’s much-loved Casson family stories about this gentle, tender-hearted tale, told through a combination of diary entries and transcripts of videos shot by narrator Bluebell Gadsby on the camera she has been given for her thirteenth birthday. A moving and funny story about an eccentric family, this is an utterly delightful summer read: when I was twelve or thirteen, I would have adored it. This one comes out next month.

The 5th Wave by Rick Yancey

I thought I was sick of YA dystopia until I read this – or rather until I heard Yancey talking to Lucy Mangan about it at an event at Penguin HQ, which I went along to earlier this week. This quote which Yancey cited, from Stephen Hawking, particularly intrigued me, especially as I’d just been reading Ghost Hawk (see below): ‘If aliens ever visit us, I think the outcome would be much as when Christopher Columbus first landed in America, which didn’t turn out very well for the Native Americans.’ I’m not usually quick to pick up an alien-invasion story, but I was genuinely gripped by this, and especially liked central character Cassie’s brilliantly sarcastic voice.

The Ghost Bride by Yangsze Choo

This haunting debut novel, which is published next month, could not be much more different from The 5th Wave if it tried. Set in 1890s Malaysia, it’s the story of seventeen-year-old Li Lan, whose life with her father is dramatically altered when he returns home with an unexpected proposition. The wealthy Lim family want Li Lan to marry their son – the only problem is, he’s dead. Haunted by her would-be suitor, Li Lan is drawn into the Chinese afterlife – a strange world of paper funeral offerings, confusing bureaucracy and dangerous spirits with agendas of their own. A wonderfully atmospheric, magical, mystical young adult romance.

I really enjoyed Byrne’s first book, the acclaimed Heart Shaped Bruise, but Follow Me Down is, if possible, even more compelling. A thriller set in an English boarding school (and so getting top marks from me straight away – my early obsessions with Malory Towers, St Clare’s and the Chalet School mean I can never resist a school story), it has a great central character in sophisticated New York emigré Adamma. Byrne is incredibly sharp-eyed about the complex ups and downs of adolescent friendships and relationships: I would have loved this when I was a teenager, and in fact it reminded me slightly of the kind of suspenseful novel I aspired to write in my early twenties (like this sort of thing, for example).

A few that aren’t in the picture (because I’ve already forced them onto other people and demanded that they read them immediately):

I adored this book: a delightful flit across the rooftops of Paris, in search of an elusive cello melody. Wistfully old-fashioned, with just the right amount of whimsy, Katherine Rundell’s second novel is a real charmer: I wish I had written it.

One of the best books I’ve read this year, Railsea proves just how masterful China Mieville’s writing can be. At once a Marxist fable, an entertaining parody of Moby Dick, and a classic children’s adventure story, Mieville cites writers as diverse as Joan Aiken, Ursula Le Guin, Robert Louis Stevenson and Spike Milligan as his inspirations for this brilliantly inventive fantasy. It’s difficult to do justice to it in a review so I will simply say: read it.

Rose Under Fire by Elizabeth Wein

A kind of companion volume to Wein’s acclaimed  Code Name Verity, this powerful Second World War novel tells the story of Rose, a young American Air Transport Auxiliary pilot and amateur poet. Captured by the Nazis and sent to the Ravensbruck women’s concentration camp, she finds hope in horrific circumstances through her friendships with her fellow prisoners, and through her poetry. I’m a fairly hard-hearted reader: unless it’s Beth dying in Good Wives or Captain Jim crossing the bar in Anne’s House of Dreams, it’s rare for a book to make me cry, but this story of hope and triumph over adversity was one of the exceptions.

Susan Cooper’s The Dark is Rising sequence were some of my most beloved children’s books, perhaps especially the first three: Over Sea Under Stone, The Dark is Rising and Greenwitch. Cooper’s latest novel is a complete departure from this tradition, but equally wonderful: a haunting, beautifully-written story of a young Native American, Little Hawk, and his relationship with John, the son of one of the early white settlers in America. This book strikes a marked contrast with the constant stream of action-packed, fast-paced children’s adventure stories that so often land on my desk, and is all the more powerful for it: I found it fascinating and enormously moving.

Next on my reading list? Kate Atkinson’s Life After Life, Molly Ringwald’s short stories, and Joan Aiken’s Felix trilogy which I’ve never read before but have recently come back into print thanks to Red Fox.

What have you read recently? Let me know any recommendations in the comments…