I’ve not been very good at posting here regularly in recent months, but that’s no great surprise given that it’s been such a jam-packed autumn.

Things got off to a pretty good start at the end of August, when I was lucky enough to chair a great children’s book event at Waterstones Piccadilly – Seeing the World Differently. This panel discussion featured three incredible authors: Carnegie Medal winner Sally Gardner, acclaimed teen author Laura Jarratt, and R J Palacio, the author of the award-winning Wonder. Meeting them and chatting with them about their work – in particular how they’ve approached the subject of difference – was a real privilege. The event was written up by Sister Spooky and Armadillo Magazine. 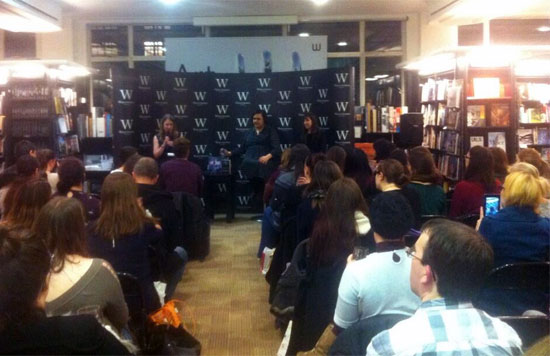 With Tanya Byrne and Lauren Kate at Waterstones Piccadilly

In fact, one way or another I seem to have spent quite a lot of time at Waterstones Piccadilly this autumn – and not just roaming the shelves to look at lovely new books I want to buy. It’s where I interviewed Queen of Teen Maureen Johnson for Booktrust, had the chance to meet one of my all-time author heroines, the legendary Susan Cooper; and attended an inspiring event with David Levithan. More recently I was back in front of the audience, trying not to fall off the  high stool and cracking bad jokes, chairing an event entitled UK vs US : is any subject taboo in YA literature? with young adult authors Tanya Byrne and Lauren Kate. The event was written up by a few bloggers, including Nosegraze (voila, le très unflattering photo) and Mira Ink.

In October I whizzed over to Bath for the Bath Children’s Literature Festival, where Malorie Blackman was appearing in her capacity as Children’s Laureate. I also went along to the autumn London Film and Comic Con for a special event to announce one of Malorie’s major Children’s Laureate projects – the UK’s first ever Young Adult Literature Convention, which will take place at London Film and Comic Con next year. It’s been really exciting working on plans for the YA Lit Con (follow #YALC on Twitter for all the latest) and I’m even more excited about the event itself, coming up in July 2014.

Children’s Book Week took place in October: I wrote and edited this year’s Booktrust Best Book Guide, which was sent to all UK schools in their Children’s Book Week packs. This year, to celebrate Children’s Book Week Booktrust also published their list of the 100 best children’s books from the last 100 years, and I blogged about just how excruciatingly difficult it was to take part in the selection process. Booktrust then invited people to vote on their favourite books on the list, and the winner (Harry Potter and the Philosopher’s Stone) was announced on Monday. I made this EXTREMELY SILLY video to celebrate the top ten winners:

A real autumn highlight for me was a trip up to visit Seven Stories in Newcastle. Seven Stories is such an incredible place. I could happily spend hours in the bookshop alone, but on our trip we managed to fit in not only a tour of the fascinating Judith Kerr and Enid Blyton exhibitions, but also a trip to the Seven Stories archive, a short drive away, where we were lucky enough to be shown some original artwork and manuscripts from Seven Stories collections by the archivist – from Edward Ardizzone illustrations to manuscripts from the likes of Enid Blyton and Philip Pullman.

The Fantastic Five (and some strange woman introducing them)

Another highlight of my autumn has been working with the inimitable Laura Dockrill, in her role as Booktrust’s writer in residence over the last six months. Laura’s Women on Top (WOT!) event which took place in September was hands down, the most fun book event I’ve ever organised. Laura wanted to do something to change perceptions of children’s books, and showcase just how dynamic, creative, innovative and exciting children’s literature can be, so we teamed up with Red Bull Studios to host an event with a difference. Laura was joined by Malorie, Caitlin Moran, Dawn O’Porter and Mel Giedroyc (she of Great British Bake Off fame) for an incredibly lively and inspirational panel discussion.

Afterwards, the audience of specially invited guests from the arts and media world had the chance to enjoy pizza and cocktails, look at books and hit the dancefloor to the sounds of a DJ set from BBC Radio One’s Gemma Cairney. I’m pretty proud that we managed to pull off a children’s book event which ended with the guests on the dancefloor throwing shapes to The Spice Girls’ Wannabe. It was a brilliant evening and I still can’t quite decide what my favourite part was, but I think it was Mel and Caitlin reciting the opening lines of Little Women

After all that I’m quite relieved December is here – roll on Christmas parties, mulled wine and (with any luck) time for a rest!