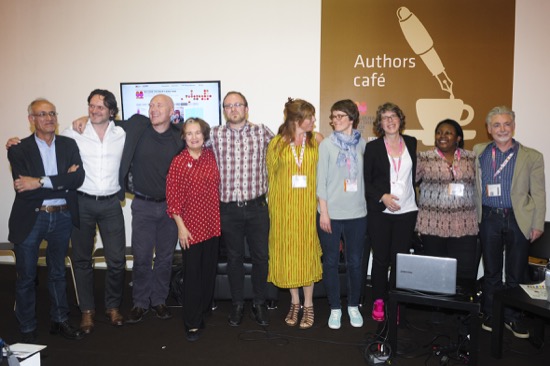 Last week I headed to the Bologna Children’s Book Fair for a very special gathering of Children’s Laureates from around the globe.

The UK Children’s Laureate was the first such post anywhere in the world, but since it began in 1999, many other countries have set up similar positions, whether they are called a ‘Children’s Laureate’ or a ‘Reading Ambassador’.

Following a meeting of the Swedish, Irish and Australian Laureates in Bologna two years ago, it was decided to bring as many of the Laureates from around the world together for an ‘international Laureate summit’ at the Bologna Book Fair in 2015 – so I was off to the Fair with Children’s Laureate Malorie Blackman!

It was my first visit to Bologna, and I was excited to see what the Fair is like. The event is very much aimed at children’s publishing professionals: it’s a place where authors, illustrators, literary agents, licensors, packagers, distributors, printers and booksellers all come together to buy and sell rights to children’s books and properties, learn  about new developments and trends, network and find new business opportunities.

Here’s my Bologna Book Fair diary from the trip:

My flight out was at an ungodly hour on Sunday morning: on arrival, I had time for a very a quick look at the beautiful historic centre (and to say hello to Malorie who was staying near the Piazza Maggiore) before checking into my hotel near the Fair.

Even though the Fair didn’t officially open until the next day, we had our first Laureate event that afternoon. After a bit of a confusing time trying to navigate the site, where set-up was underway, I found my way to the room where our event was taking place, where Malorie and several of the other Laureates from Australia, Ireland, Finland and Sweden had already gathered, along with their teams.

The first event was a private meeting, designed to give everyone the chance to get to know each other. Julia Eccleshare, children’s books editor for the Guardian and stalwart of the UK Children’s Laureate Steering Group, facilitated a roundtable discussion in which each Laureate had the chance to introduce themselves, and to talk about their work. The group also discussed their aims for the summit and what we all hoped to get out of the next few days. 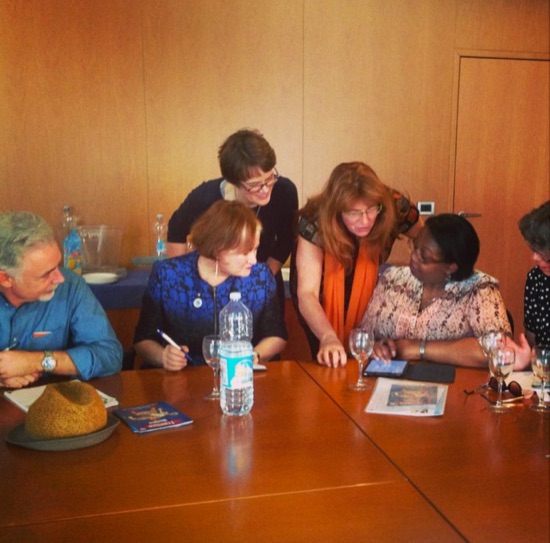 That evening I attended my first Bologna party, given by Penguin Random House USA, where I also drank my first glass of Prosecco for the trip  – a Bologna essential!

Next up was dinner with the Children’s Laureates and their teams – it was great to have the chance to talk to people who do similar work in organisations from all around the world. While we were there, the two Welsh Laureates arrived to join us – Anierin Caradog who is the Bardd Plant Cymru, and Martin Daws, who is the Welsh Young People’s Laureate. After much pasta (seriously, more pasta than I would ever have thought possible to consume in a single sitting) we all headed back to our hotels for a much needed rest ahead of Day 2!

To the Book Fair! I headed for the main entrance, where the first thing that caught my eye was this amazing Alice in Wonderland carpet. 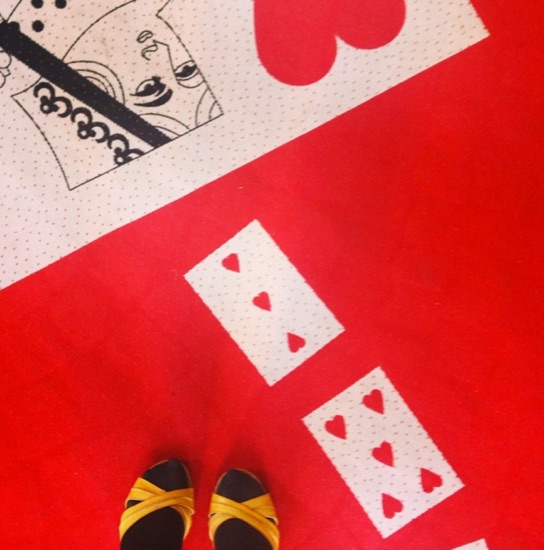 Our next Laureate session was an invite-only event aimed at organisations from other countries that were interested in learning more about the Children’s Laureate initiatives, and in gaining useful information that might even help them set up a Laureate programme of their own. Representatives from countries including Italy and New Zealand, attended to hear more about the Children’s Laureate, including how the schemes work on a more practical level. Building on the discussions the previous day, the Laureates also had chance to talk in depth about what they wanted to get out of the summit, and possible ways to work together in future.

After the event, Malorie and I spent some time exploring the Book Fair. There was so much to see: we visited some publisher stands including the Barrington Stoke stand where Malorie received a rousing welcome and we embarrassed her by making her pose by her name for this picture. 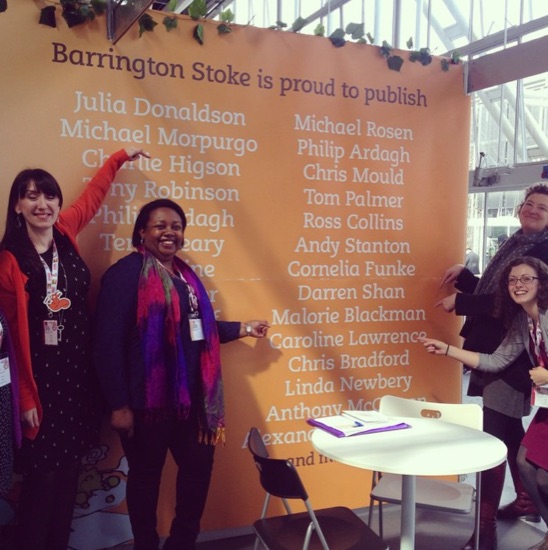 Next it was on to the very large and impressive Penguin Random House stand where Malorie was introduced to author Sophie Kinsella, whose first young adult book Finding Audrey is published this year, as well as fitting in a quick photo and interview for Publishers Weekly. 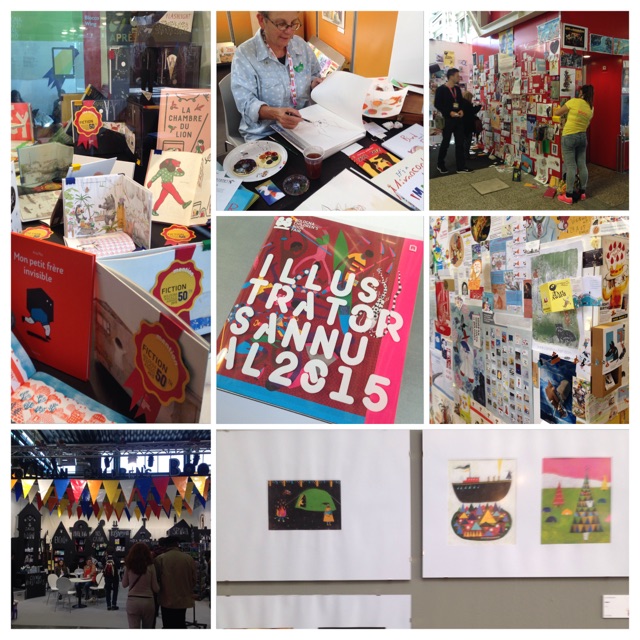 There was plenty more time for exploring in the afternoon. I visited colleagues from Ireland on the Children’s Books Ireland stand, and from Australia on the Australian Children’s Literature Alliance stand where Australian Laureate Jackie French was chatting to visitors, and Ann James was demonstrating the mud painting techniques she used in her book I’m a Dirty Dinosaur. Justine from ACLA showed me a lovely animated version of the same book, with Ann reading aloud: this is part of the StoryBox Library project, which is designed to allow Australian children the chance to hear stories told in Australian voices.

There were so many publisher stands to browse. As well as all the familiar English language publishers, there was also a host of international stands to explore from publishers I was completely unfamiliar with. It was a great way to get a snapshot of the global publishing industry, and I enjoyed taking in everything from unusual European illustrations, to beautiful papercraft from Asia – not to mention spotting characters such as Miffy, Peppa Pig and Pikachu wandering around.

Obviously it was also essential to stop for a brief gelato break in the sunshine! 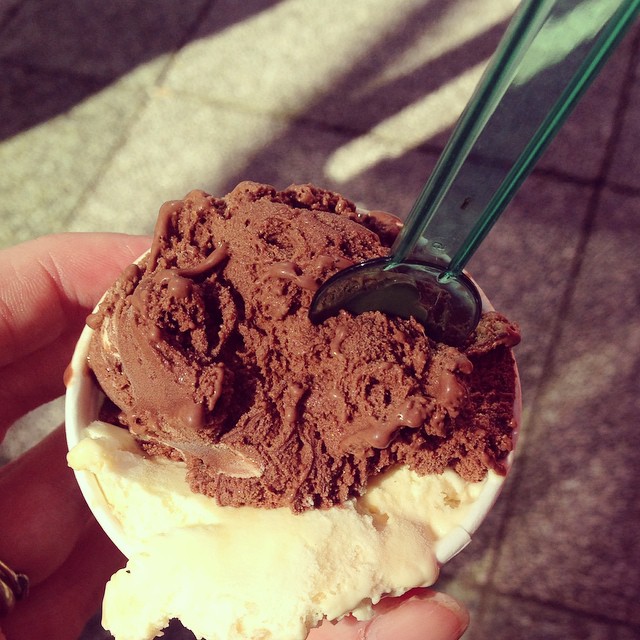 Most of all, I enjoyed looking at the  incredible illustration exhibitions including an exhibition of work by illustrators from this year’s Guest country, Croatia; a display of ‘silent books’ (wordless picture books); and of course, the famous Bologna Illustrators Exhibition which displays the best new illustration work from around the world. I could have spent hours looking at all the lovely work on display, and it was only the fact that my suitcase was already full to bursting that stopped me immediately buying a copy of the exhibition catalogue to take back home! 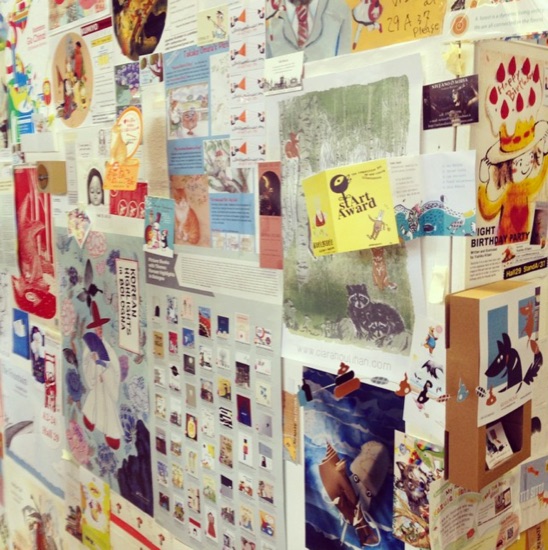 After an afternoon of enjoyable exploring, I met my Down the Rabbit Hole co-host Melissa and her colleague Florentyna at the Macmillan Children’s Book stand, where they were celebrating two new books from Meg Cabot. We hopped on the free bus into Bologna town centre, where Melissa took Florentyna and I on a tour of some of Bologna’s bookshops, including a fabulous children’s bookshop in a converted church, and the wonderful Ambasciatori librerie.coop – part bookshop, part trattoria, where books were sold alongside wine and all sorts of delicious food – basically, the perfect combination!

Our next stop was a reception being held by Scholastic at the Palazzo Re Enzo – a glorious old building on the Piazza Nettuno, where the guests were entertained by a fantastic speech about reading for pleasure from Captain Underpants creator Dav Pilkey. We went on to join some of the Scholastic team for a special dinner for Axel Scheffler, and after many courses (including even more pasta) we headed to the Swine Bar for what else but a glass of Prosecco to round off an excellent day.

After breakfast in the hotel, I headed back to the Fair to catch up with the lovely Kristen Harrison from Curved House Kids.

We took in a couple of events from the Fair’s seminar programme: first up, a session about children’s books in translation, followed by a presentation of a new cultural app for kids, Art Stories, at the Digital Cafe. After a quick panino in the sunny courtyard, it was on to the announcement of the prestigious Astrid Lindgren Award. This year the Award was given to South African reading organisation PRAESA and it was fascinating to hear about some of their work.

In the afternoon it was time for our third and final Laureate event – a public session bringing together all of the Laureates at the Authors Cafe. We were joined for this session by the newly-arrived Mexican and Dutch laureates, giving us a grand total of 10 Laureates in all! The event, which was once again chaired by Julia Eccleshare, was a fantastic celebration of reading promotion around the world, including a Welsh song from Anierin, and a spot of performance (with audience participation) from Martin. Afterwards it was time for the all-important group photo.

Had such a fantastic time at the #BolognaBookFair. Here’s the 10 Laureates from around the world! #childrenslaureate pic.twitter.com/mHrlYkIU0z

After the event, Children’s Books Ireland held a reception on their stand. I head back into town to join Egmont’s party at Le Staze. It was great to meet some of the Egmont team before heading to join Malorie at a dinner for Frank Cottrell Boyce, given by Macmillan Children’s Books to celebrate his new book The Astounding Broccoli Boy.

After packing up and checking out of the hotel, there was just enough time for a final visit to the Fair. I wanted to spend some more time looking at the exhibitions, but also to visit the amazing Fair Bookshop.  I could easily have spent a fortune in there, especially on the heart-stoppingly beautiful array of picture books from all around the world! 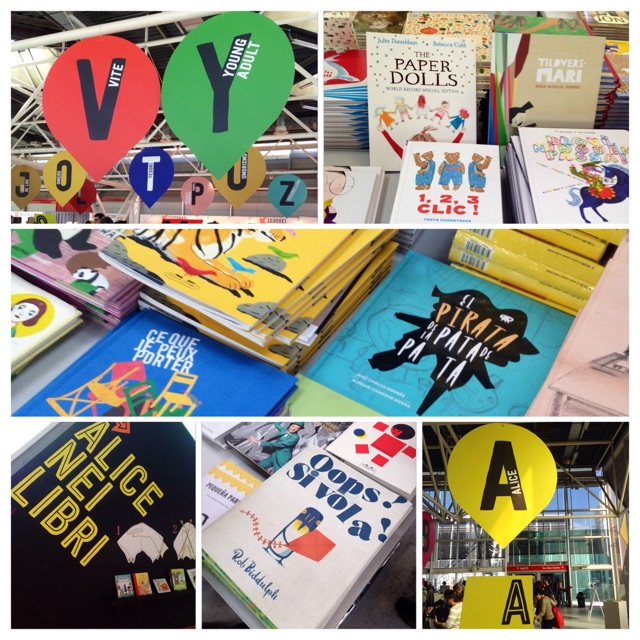 I said goodbye to some of my Laureate colleagues and had the chance to chat about the next steps for our international work: we’re all excited to continue the conversations that started in our meetings, and to reconvene in Bologna again in two years’ time for our next ‘summit’. I also popped along to the Egmont stand where I spotted a proof of The Mystery of the Clockwork Sparrow!  And last of all there was time to squeeze in a final gelato before heading to the airport. 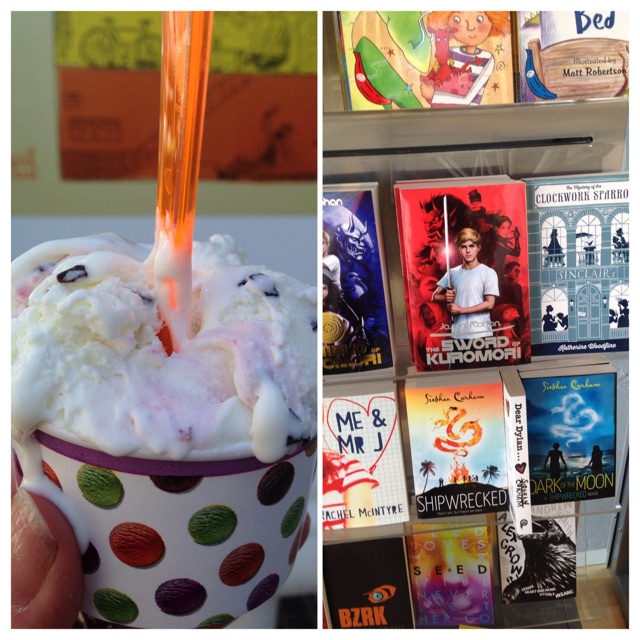 Arreverdeci Bologna – you were marvellous! I hope I’ll be back again next year.