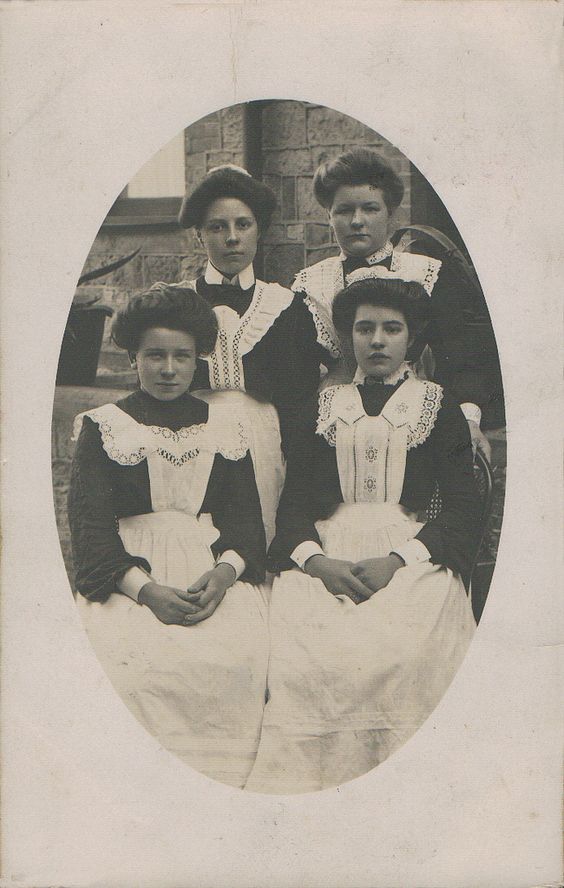 In the Sinclair’s Mysteries I’ve enjoyed exploring what life was like in the Edwardian era for children and teenagers from different backgrounds. Unless they were from a wealthy family, most children in the 1900s would leave school when they were 13 or 14 years old, and would be expected to go out and work for a living. Many would take on apprenticeships; they might find work in a shop, like Sophie in The Clockwork Sparrow; or they might become a clerk, as Billy does in The Jewelled Moth. The less fortunate might end up working long hours in a factory, like the children Billy and Joe meet in The Midnight Peacock; or some, like Joe in The Clockwork Sparrow, might struggle to find work at all.

But one of the most common routes into employment at the time was to ‘go into service’ – in other words, to become a domestic servant. In 1911, 800,000 families in Britain employed their own domestic staff. For many of these, this would be a single servant (sometimes called ‘a maid of all work’) – often a girl in her early teens who dealt with all the domestic work single-handed. In the days before the labour-saving devices we take for granted today (washing machines, vacuum cleaners, dishwashers… the list is endless) this often meant an incredible amount of work.

For very wealthy families living in grand houses, however, it was usual to employ a large staff, all of whom would live on the premises in the ‘servants’ quarters’. This could include kitchenmaids, a cook, housemaids, footmen, nursemaids to look after the children, lady’s maids, valets, chauffeurs, and of course the all-important butler and housekeeper – the most senior and important members of staff, who were responsible for the other servants. In very large houses the staff might also include more obscure positions such as: the ‘odd man’, who was responsible for tasks like carrying luggage; the ‘still room maids’ who  worked in the still room making jam, preserves and soap or brewing beer;  the ‘lamp-and-candle boy’ whose specific responsibility was filling lamps and tending to candles (at Longleat in 1915, where there was no electric light, a lamp boy had to collect, clean, trim and fill 400 lamps a day) or even the ‘gong man’ whose main duty was ringing the gong three times a day to signal mealtimes!

A grand country house like Winter Hall could have a huge number of servants: at Welbeck Abbey in Nottinghamshire, the Duke of Portland maintained an entourage of 90 indoor servants. Even when there were a smaller number of staff, guests arriving for a country house party might well bring their own servants with them, such as a lady’s maid, valet or chauffeur. The Duke of Devonshire found 200 servants the bare minimum to look after a house party of 50. 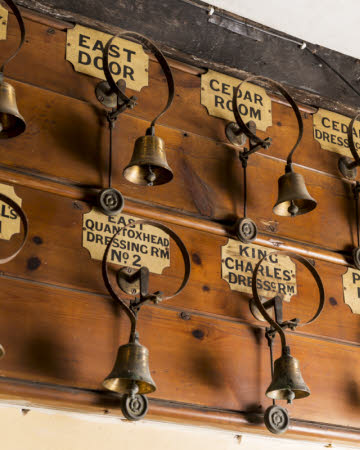 It sounds extraordinary now, but the Edwardian upper classes were so used to being looked after by their servants that they were sometimes incapable of doing quite simple tasks for themselves. They might ring the bell for a footman to do something as straightforward as poking a fire. Famously Lord Curzon was so baffled by the challenge of opening a window in the bedroom of the country house in which he was staying (no servants being available late at night) that he smashed the glass!

Traditionally servants at a big house would start young, at about 13 years old. Life in a country house could be tough: these young servants worked long hours doing hard physical work, and (like Sarah the scullery maid in in The Midnight Peacock) they would often feel homesick at first, living away from family and friends. But being in service was considered a good, secure job, offering the opportunity to climb the ladder. Starting out as a footman or housemaid, a young servant might aspire to one day achieve a prestigious position as a butler or housekeeper, where they would be afforded special privileges such as having their own private sitting-rooms, and might even be waited on themselves by the more junior servants.

In The Midnight Peacock we meet Tilly, a young under-housemaid at grand country house Winter Hall, (which readers may remember is Leo Fitzgerald’s family home). Tilly has grown up ‘below stairs’ at Winter Hall, and the servants’ quarters are her home. Cook, who has brought her up, hopes that she will one day rise to the important position of lady’s maid – but Tilly herself has very different dreams. In this way, Tilly anticipates the changes that were already on the horizon at the end of the Edwardian era. The First World War would bring about disruption to traditions, and the old ‘upstairs, downstairs’ world would soon be gone for good…

If you’re interested in reading more about the life of servants during the Edwardian era and beyond, I’d heartily recommend Lucy Lethbridge’s fascinating book Servants: A Downstairs View of 20th Century Britain. There are also lots of children’s books featuring servants in the 19th and early 20th centuries: try The Secret Countess by Eva Ibbotson, Thursday’s Child by Noel Streatfeild, Nancy Parker’s Diary of Detection by Julia Lee, Frost Hollow Hall by Emma Carroll and A Little Princess by Frances Hodgson Burnett to name just a few.