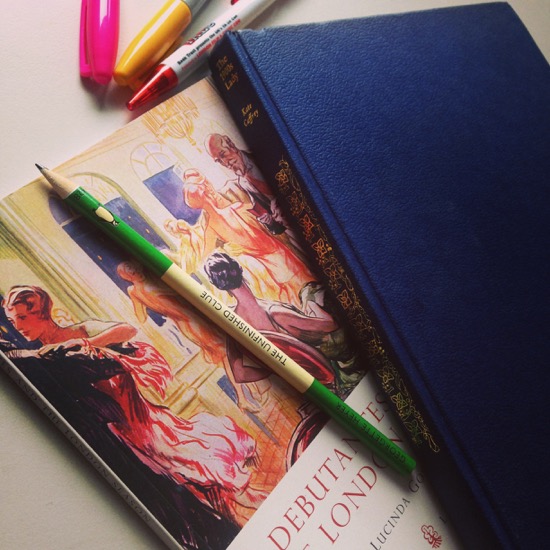 To mark the publication of The Midnight Peacock, the final book in the Sinclair’s Mysteries series this week, I thought it would be fun to share some of my research process for the books. I love research and it’s something that I’m often asked about when I’m out and about at events and talking to readers.

Here are seven ways that I’ve approached researching the series and imagining myself back into Edwardian London:

Visual inspiration is really important to me: I love collecting images and using them as a spring-board for writing. From the very beginning I started gathering together images that would help me imagine what 1900s London and the world of an Edwardian department store would look like. They included: Edwardian photographs that reminded me of my characters; images of 1900s maps, newspapers, bus-tickets and advertisements; photographs of London shops and street scenes; 1900s art, design and illustration; and of course lots of pictures of Edwardian fashion – from gowns to shoes to the all-important hats. Although many of the images were from the 1900s, I also gathered more contemporary images that had an Edwardian vibe or which evoked elements of the series to me.

Pinterest was an incredibly useful tool here: I made an ‘Edwardiana’ board where I could collect images I found online, as well as a secret Pinterest board for each book, which I later shared with my editor and designer. As well as providing a useful reference point, the material I collected really helped me to develop an aesthetic and atmosphere for each book   . I’ve now made all the boards public – you can see them here. It’s interesting looking back to see how different each board is – from the light, frothy brightness of Clockwork Sparrow to the darker, autumnal feel of Painted Dragon right through to the rich and sumptuous jewel tones of Midnight Peacock.

Making a digital collection of images like this is super quick and easy, but if you prefer to take a more analogue approach, I also love sticking up postcards and other relevant images around my desk, or on a pin-board. For the Sinclair’s Mysteries I also made a scrapbook where I could collect together hard-copy images that had inspired me – you can read more about it and see some pictures over on the Egmont blog.

2) Reading back in time

At the very beginning of the writing process, I tried to read as much as I could that I had been written during the late 19th and early 20th centuries, starting with children’s books by the likes of Frances Hodgson Burnett and E Nesbit. However I didn’t stop with children’s fiction – I read all kinds of other books as well, casting my net as widely as possible. These included: Edwardian detective and spy novels; classics by authors like E M Forster; contemporary works of non-fiction like Jack London’s The People of the Abyss (which was particularly helpful for researching the East End); memoirs (I loved Dodie Smith’s Look Back With Love, and semi-autobiographical novels like The Vicarage Family by Noel Streatfeild and The Edwardians by Vita Sackville West); and even etiquette guides and travel guides. I found this breadth of reading really helped immerse me in the world of the Edwardians and often sparked off unexpected ideas for the stories.

I’ve used the British Library a huge amount for my research: one of the things I loved best about working there is that I was able to look at original copies of Edwardian books and periodicals, which was invaluable. For the Sinclair’s Mysteries, I looked at material such as an original 1900s Baedeker’s Guide to London, as well as magazines like Boy’s Own and Boys of England (which inspired the fictional magazine Boys of Empire which Billy reads). There’s something really quite magical about being able to look at a book that’s over 100 years old!

As well as reading lots of late Victorian and Edwardian material, I also sought out contemporary books set in or around the Edwardian period. Two I read very early on were Shopping, Seduction and Mr Selfridge by Lindy Woodhead (a biography of Harry Gordon Selfridge, the founder of Selfridges) and The Children’s Book by A S Byatt – two extremely different books that both had an important part to play in shaping the series.

Later I sought out more specific books to help me research particular elements of Edwardian society. For the artistic community of The Painted Dragon, for example, I read A Crisis of Brilliance by David Haycock, Among the Bohemians by Virginia Nicholson, and 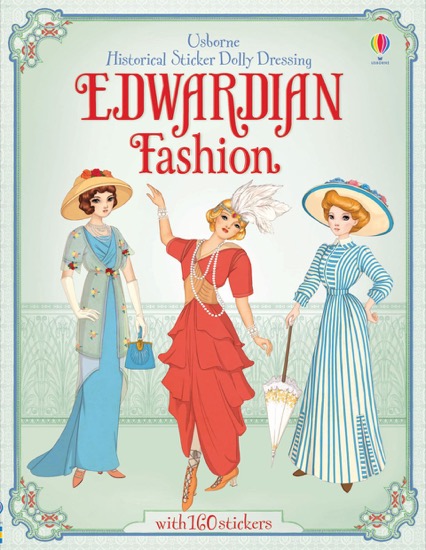 Life Class by Pat Barker. When I’m researching a specific topic, I particularly look for non-fiction titles which have lots of rich detail and personal anecdotes –  though once again I do like to look at a wide variety of different reading matter. For me, illustrated children’s books, novels or books of photography or fashion history can be just as helpful as traditional history or biography. Even a sticker book – like this lovely Edwardian one from Usborne – might have a part to play in your research!

I love pottering around museums and galleries and this element of the research process was a real joy for me. The Museum of London was a great starting point for the Sinclair’s Mysteries: their collection includes items like an Edwardian motor-taxi, the original 1920s lift doors from Selfridges, a variety of Suffragette memorabilia, and Edwardian clothing. I also love their Victorian shopping street which is a great example of what London shopping was like before the Edwardian department store came along!

Lots more inspiration was found at the V&A, the British Museum, the Museum of London Docklands (especially helpful for The Jewelled Moth), the National Gallery, Tate Britain, the National Portrait Gallery, the London Transport Museum and the Royal Academy. The Wallace Collection was the perfect setting to picture Mr Lyle in The Painted Dragon (you can even see the painting ‘The Swing’ by Fragonard that Lil recreates in the book). An impromptu visit to Two Temple Place was really helpful in bringing to life the interior of Lord Beaucastle’s mansion in The Jewelled Moth. 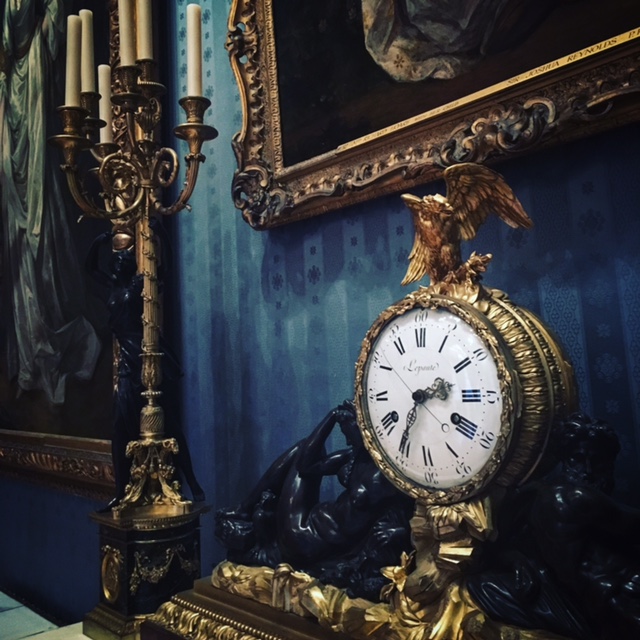 At The Wallace Collection

I’d hugely recommend a museum or art gallery visit as a source of inspiration, especially when you’re feeling short on ideas. There’s something very powerful about seeing artworks or objects from the past ‘in the flesh’ – their colours, textures and physical qualities. A painting,  a photograph or an object can be a great starting point for writing.

I’ve also found museum and gallery shops useful places to find interesting or unusual non-fiction books, postcards and historical maps  – early on in writing The Clockwork Sparrow I bought a copy of a 1900s map of London from the Museum of London shop which has been invaluable in helping me get a sense of Sophie & Lil’s London.

Film and TV can be a brilliant way to immerse yourself in a particular time period. For the Sinclair’s Mysteries I watched lots of 1900s-set films, from old favourites like The Secret Garden, The Railway Children, Howard’s End and A Room with a View to newer movies like The Illusionist, Suffragette and Testament of Youth (the latter has particularly gorgeous 1910s fashion). Handily, Downton Abbey was also on TV while I was writing the first book.

One obvious TV reference point for me was the TV series Mr Selfridge. However, I’d already started working on the series before the series came out, and so made a deliberate decision not to watch it, because I didn’t want my own Sinclair’s department store to be too strongly influenced by the TV version of  Selfridges. I think it was probably the right decision – though I’ve since caught up on a couple of episodes and I loved seeing how they brought Edwardian London and a brand new department store to life.

I’ve spent hours exploring London while writing the Sinclair’s Mysteries. I love walking, and the books   have taken me everywhere from London’s elegant Mayfair (scouting locations for Veronica Whiteley’s home) to the winding streets of the City (where I spotted the perfect place for the mysterious gentlemen’s club Wyvern House) to the East End (where I hunted for traces of London’s first China Town, where Mei Lim and her family live).  You can see my interactive map of real London locations that helped inspire the series here.

On my wanderings I’ve spotted all kinds of fragments of old 1900s London beneath the surface of the contemporary city  – from ‘ghost signs’ (faded old advertisements that can still be glimpsed on the side of buildings) to 1900s lampposts. I’ve ridden on the tops of London buses trying to imagine what the view would look like for Sophie in Edwardian London; I’ve peered out of windows and explored mysterious alley-ways; and have even gone rowing in a London park to help me get into the mood for a spot of Edwardian boating (in The Jewelled Moth).

Of course I’ve also visited lots of London’s real-life Edwardian department stores. As well as Selfridges, key points of inspiration for the books included Liberty’s, Harrods, and Fortnum & Mason. Liberty’s and Fortnum’s are particularly lovely for a spot of research: stepping through the doors feels rather like going back in time.  There’s also a wonderful Edwardian vibe to old-fashioned shops like Hatchard’s, streets like the Burlington Arcade, and London hotels and restaurants like the Wolseley on Piccadilly – which leads me beautifully onto my seventh point…

One of my very favourite research methods! As in all good children’s books, the characters in the Sinclair’s Mysteries do a fair amount of eating, so I spent time finding out about what Edwardian people typically ate. (For the very wealthy it was a quite terrifying amount of food – as anyone who has watched Sue Perkins and Giles Coren’s Edwardian Supersize Me will know!) 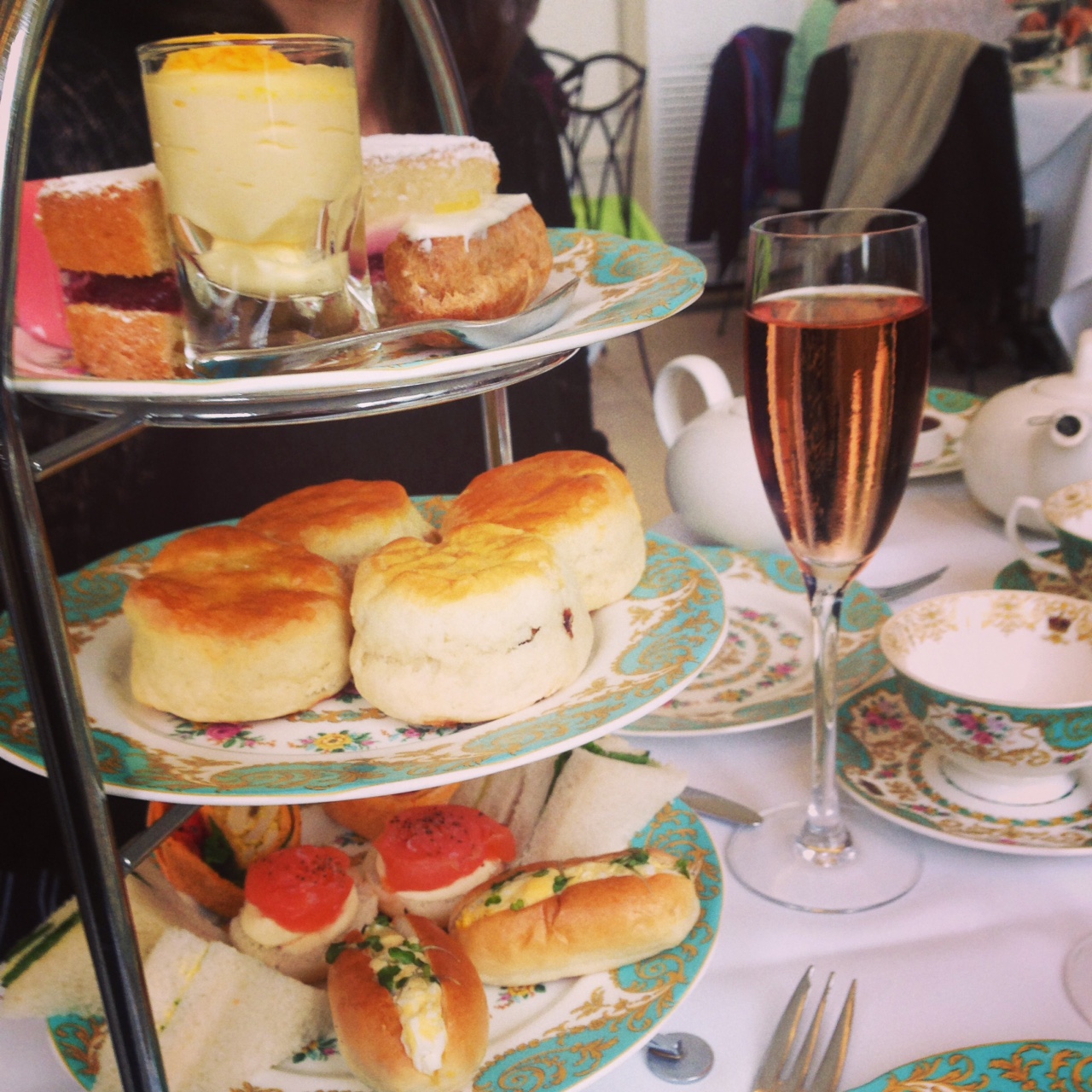 Obviously it was only right and proper that I tested out the kind of afternoon tea that might be served up at Sinclair’s, including many cakes, buns, sandwiches and other delicacies. My agent Louise and my editor Ali have been particularly helpful in making sure we’ve done plenty of this all-important research: we even celebrated the publication of The Clockwork Sparrow with a special afternoon tea at Harrods!

It may sound frivolous (and let’s face it, I don’t really need much of an excuse when it comes to eating cakes) but I really do think that focusing on details like what people ate and the clothes they wore goes a long way to helping you imagine what life in another time might have been like.

So there you have it: my seven top tips for researching historical fiction!

If you’re interested in finding out more about the historical background to the Sinclair’s Mysteries, you might also enjoy my Behind the Scenes series exploring some of the real-life history that inspired the books.