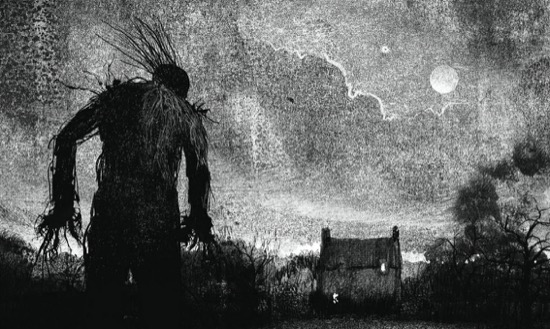 This interview was first published on the Book Trust website http://www.booktrust.org.uk

A Monster Calls, written by Patrick Ness and illustrated by Jim Kay, has become the first book ever to win both the CILIP Carnegie and CILIP Kate Greenaway Medals. I spoke to Patrick and Jim about how it feels to share this remarkable honour.

‘One of the defining books of its generation’ is how Rachel Levy, Children’s Library Services Manager for Sutton Libraries, and Chair of the 2012 CILIP Carnegie and Kate Greenaway judging panels, has memorably described A Monster Calls – the first book ever to win both the Carnegie and Greenaway medals.

In winning the Carnegie this year, former Booktrust online writer in residence Patrick Ness also becomes the second author ever to win the award in two consecutive years: he also won the medal in 2011 for the third part of his acclaimed Chaos Walking trilogy, Monsters of Men.

‘Sharing the honour with Jim is great,’ says Patrick. ‘I never expected to win the Carnegie again, but I hoped they might give the Kate Greenaway medal to Jim this year. That was my best case scenario. I never thought they would give both medals to us, so it was a huge surprise.’

Remarkably A Monster Calls is only the second children’s book Jim Kay has illustrated: he credits it with ‘changing my life’. Of winning the prestigious Kate Greenaway Medal, he says: ‘It was great to even be shortlisted. To win the award was just fantastic and not at all expected. It’s a wonderful feeling and it still hasn’t really sunk in. For anyone in illustration, this is a big deal. The list of winners is like a “who’s who” in illustration and it’s fantastic to think my name will be on that list alongside people like Michael Foreman.’

Patrick also acknowledges the prestige of winning the Carnegie. ‘It’s the oldest prize. CS Lewis won it, Ransome won it. It has an incredibly august history.’ But for both Patrick and Jim, it’s ultimately the Carnegie and Greenaway judging processes that set these prizes apart. The judging is rooted in the professional expertise of librarians across the country, who nominate titles to be considered for the shortlist. Patrick explains: ‘Children’s librarians are the ones who are right on the frontline, talking to teenagers and children every day about books. They are the real experts.’

The CILIP Carnegie Greenaway shadowing scheme, which sees children and young people in book groups in schools and libraries all over the country read amd discuss the shortlisted books, is also key to the prize. Patrick says the scheme is ‘brilliant: it’s one of my favourite things in the whole world…. Yesterday I spoke to several shadowing groups in Berkshire and there were a couple of hundred kids there, who were all arguing about the books. They’ve read the books – they are are excited about them, they disagree about them. It’s fantastic.’

Jim adds: ‘We’ve spent hours going through the comments on the shadowing website. I don’t have that much direct contact with readers, and what’s really interesting to me is how well they understand the books. And they’re so honest! It’s fantastic to read their comments.’

One young reviewer from the shadowing scheme described A Monster Calls as a book that ‘not only has the ability to break your heart, but to heal it as well’, touching on the emotional power of a book that Rachel Levy has described as ‘outstanding in every way… a book that readers will remember and return to over and over again.’

But for both Jim and Patrick, it’s also the format and illustration of this beautifully-presented book that make A Monster Calls special. Patrick explains: ‘Books for teenagers and older readers rarely get illustrated – almost never. We thought: why not try to break those rules? Illustration isn’t just for picture books, though picture books are glorious things. Illustration is for everyone.’

Jim adds: ‘Walker didn’t limit us to plates… I was allowed to flow in and out of the text, and that’s a hugely liberating thing for an illustrator. It’s a very rare thing – you see it more in graphic novels.’ Both hope that the book will help to set a precedent, encouraging other publishers to be more adventirous with illustrated books for older readers. Jim comments: ‘I hope it does kickstart a bit more freedom in the way that we see illustrated books, and give illustrators the opportunity to do things differently.’

Of Jim’s illustrations, Patrick says: ‘I think the reason they work so well is that they are suggestive. You never see Conor, for example – you only see silhouettes. Jim’s illustrations give you space for imagination. They create an atmosphere but they don’t tell you how to read the book. Instead they provide a landscape in which you can read the book, and that’s an important difference.’

Jim adds: ‘The text gives you a certain degree of ambiguity and the description is quite sparse. It allows the reader to evolve the story in a very personal way. As an illustrator it was great because not every character is completely pinned down. It gives you that manouverability to build a stage set around the characters and that’s really what we were trying to do.’

The book is also particularly special in that Patrick created the story from the final idea of the late children’s writer Siobhan Dowd, who died in 2007, herself a Carnegie Medal winner (posthumously for Bog Child in 2009). Patrick is specific about how he sees the relationship between Siobhan’s original idea and the finished text:

‘I don’t want to suggest that I’m somehow a conduit for Siobhan. I always think of writing as secret. You have to create a really private space to be free to create, that can’t be seen by other people. For me, in the process of writing this book, it was about bringing Siobhan along to that secret place with me.

‘Even for the best reasons, you cannot write a book as tribute… The risk of that is that you write a bad story, which would be the worst tribute. But in the introduction to the book I talk about running with the baton, and I think that’s the spirit of it. I wasn’t trying to guess what Siobhan would do, but just to grow the story as she would have done. In the end, I hope it isn’t a final tribute but something better, because it keeps people talking about her. It keeps people going back to her other books and reading them; it keeps her name in discussion. It’s a living thing, not a memorial.’

One question that many people will now be asking is whether the two have any future plans to work together. Jim explains: ‘We don’t have any concrete plans yet but I would love for us to work together again in future. I would be delighted and honoured. ‘