View London in a larger map

To celebrate a second year of living in London, I thought I’d revisit the map of favourite London places that I created this time last year, and add a selection of new favourite spots. The map includes everything from places to eat and drink, to art galleries, to bookshops, to the best spots for simply wandering and people-watching.

Click one of the coloured pins for more information, or click here to see the full map with all the locations and notes.

So, where have I missed? What are your favourite London places?

I finally managed to get down to Tate Britain to see Susan Hiller’s exhibition last weekend, on the final day of the exhibition, and I’m so glad I did. I was intrigued by the sheer variety of work on display, spanning four decades of Hiller’s career, but also amongst this selection were some incredible stand-out pieces that I found especially captivating.

Many of the works in this show engage with notions of meaning and memory, including what is lost and forgotten. I found myself especially drawn to those that had an anthropological quality, collecting materials often seen as disposable or ephemeral – from seaside postcards or clips from popular films – and carefully assembling and cataloguing them to give them new status. Dedicated to the Unknown Artists, for example, is a collection of postcards from British seaside towns, all of which share the same caption: ‘Rough Sea’. Accompanied by meticulous charts and documents mapping their location and information about their finding, they are both beautiful in their own right, immediately evoking windswept, faded seaside towns, and intriguing as a kind of museum collection. The title makes it clear that the work is in part intended as a tribute to the forgotten artists who painted, photographed and hand-tinted these scenes.

Monument is a tribute of a different kind, but once again exploring the idea of lost or forgotten identities. There’s a strangely uncanny feel to this series of photographs of memorial plaques from a neglected Victorian monument to civilian heroes from a London park. From the Freud Museum, on the other hand, takes this notion of re-investing meaning in a different direction, bringing together a range of apparently unrelated ‘found’ objects in a very personal take on the museum collection. Presented in identical brown cardboard boxes, the ephemera collected takes on a potent quality, becoming a series of mysterious personal mementos, relics and talismans – a system of fragments that point towards an ultimately inaccessible narrative.

There’s a similarly mysterious quality to The Tao of Water: Homage to Joseph Beuys – a cabinet containing bottles filled with water collected from holy wells and streams around the world. Regardless of the nod to Beuys, there’s something intriguing, beautiful and rather magical about this array of tiny, delicate antique bottles and test tubes, each carefully labelled with the location it was collected, and pointing to a multitude of different sacred sites.

There are a number of film and video works in the exhibition, which exhibit a similar quality of compelling strangeness, such as  Psi Girls (1999), which assembles a series of images taken from films of girls with telekinetic powers in a weirdly mesmeric installation. However, for me it was the final work that had the most overwhelmingly powerful impact. Witness is an extraordinary installation: a hanging garden of what initially appear to be ethereal silvery tendrils, dangling from the ceiling of a darkened room. On stepping inside this softly glowing space, it becomes clear that these are in fact a host of tiny circular microphones, hanging from silver wires attached to the ceiling. Listening to each microphone reveals a quiet yet matter-of-fact voice, which could be speaking any one of a number of different languages, telling his or her story of an encounter with UFOs or creatures from other spheres. Whether these stories are real or imagined is hardly the point: it’s the experience of listening to these hushed voices in this breathtakingly beautiful science-fiction style space that makes the work powerful.

Full of wonder, strangeness and ultimately, pathos, Witness was for me the undoubted highlight of an intriguing body of work, which always comes back to the idea of the unknown and inaccessible. Echoing with haunting lost voices and layered with fragments of forgotten things, this exhibition was a poweful experience and one I’m glad not to have missed out on:  a thought-provoking and inspiring retrospective. 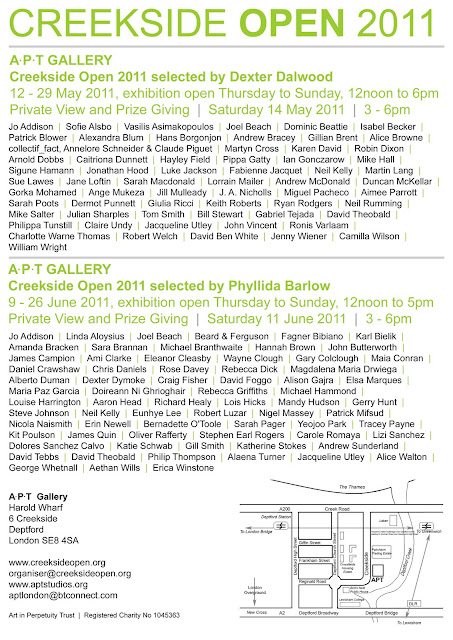 ‘Why didn’t I take any photographs?’ is a question I once more find myself asking after yesterday’s visit to A.P.T.  Gallery in Deptford for the 2011 Creekside Open. As usual I was too busy chatting, looking at art and people-watching to remember to take any pictures. I am going to make a determined resolution to take more photographs at events I go to in the future: in the meantime, you’ll have to make do with this invitation (above) and a few words on the show, since I don’t have any photographs to share.

is an annual open competition for visual artists: what sets it apart from other, similar initiatives is that each year, two separate exhibitions are selected by two different selectors from the same pool of submissions. This year’s selectors are Dexter Dalwood and Phylida Barlow: Dalwood’s selection opened at A.P.T. Gallery yesterday, and the second exhibition, selected by Barlow, will open in June.

From some 2,700 works submitted, Dalwood has chosen an interesting range of work for his show, including paintings, sculpture and video works, many of which engage with the notion of abstract representation. The gallery pops with lively colour and there’s a pleasing feeling of playfulness here too, in work such as Jill Mulleady‘s scribbly yellow painting, Martyn Cross‘s vandalised knitting pattern, and Miguel Pacheco’s oddly hypnotic video sequence. Other pieces that caught my eye included two works making explicit references to exploring and deconstructing the history of art: an intriguing piece by Jenny Wiener ‘mapping’ a painting by Cezanne, and Andrew Bracey‘s delicate paper-cut which transforms an image of a painting in an auction catalogue.

Images from all of the works from the exhibition are available to view here. The Creekside Open selected by Dexter Dalwood will be on display at A.P.T. Gallery until 29 May 2011. 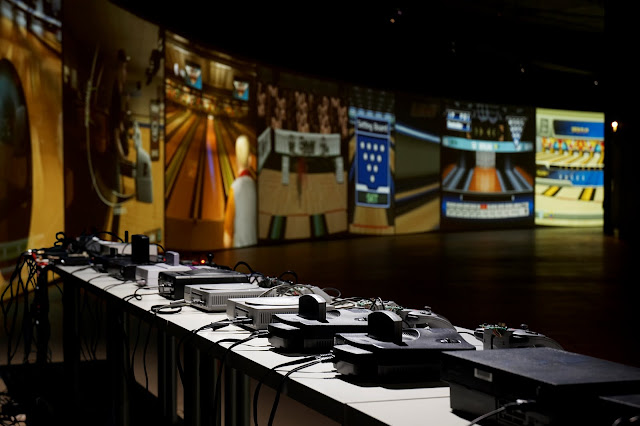 It’s been an historic week, so what shall I write about today? The Royal Wedding? The death of Osama Bin Laden? AV? Nope: media art inspired by computer gaming, that’s what.

Cory Arcangel is one of the best-known artists working with computer technology, including video games, software and the internet. His digital interventions are pleasingly subversive, playful and often tongue-in-cheek: I love his weirdly hypnotic Super Mario Clouds (2002) in which he transforms Nintendo’s classic Super Mario Brothers game by removing all the elements except for endlessly scrolling clouds. Another appealing piece of work is Drei Klavierstüke, op 11 (2009) – a note-by-note, frame-by-frame version of Klavierstüke op 11 (1909) by Arnold Schoenberg, recreated entirely using Youtube videos of cats playing pianos.

I was intrigued, therefore, to pop along to the Barbican’s Curve Gallery this week to see the newest installation by Arcangel, Beat the Champ, which brings together a series of 14 bowling video games from consoles from the 1970s to the present day. Projected along the length of the dimly lit gallery, which itself becomes a kind of virtual bowling alley, the consoles have all been programmed by the artist to play continuous – but scoreless – games. The result is an entertaining collage of endless ‘gutter balls’ and ‘no scores’, whilst the combined sounds of all the different games create an intriguing cacophany of sound. It’s a clever piece: fun, slightly mocking, but also genuinely thoughtful about the roles technology and gaming plays in our lives – in this case, their failures as much as their potential.

Beat the Champ is on show until 22 May 2011. If this sort of thing is up your street, there’s also a talk linked to the exhibition taking place next Wednesday at 7.00pm: Ear Candy will be exploring the role of music in video games from the Commodore 64 era to the present day.

Also here’s the film with the cats, because… um… well, just because… 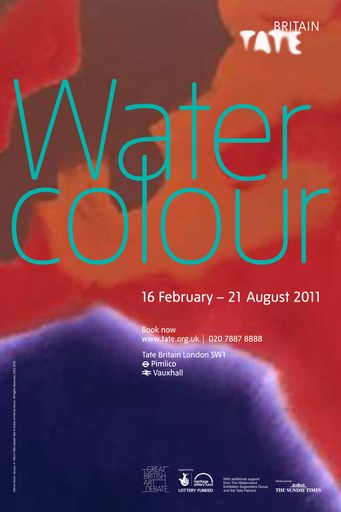 So this is an ambitious one even by Tate Britain’s usual standards. Watercolour takes on a medium that has historically been associated with wishy-washy flower paintings by Victorian ladies, or runny landscapes by amateur painters, and invites us to challenge our preconceptions, in what aims to be ‘a fresh assessment of the history of watercolour painting’.

The result is a whistle-stop tour through the history of watercolour as a medium, showing it to be far more than a vehicle for representing nostalgic English rural scenes. The 250 paintings in this exhibition in fact include not merely sunsets and meadows, but also maps, abstracts, botanical illustrations, and even paintings of battlefields and concentration camps. Though there are some notable omissions (David Hockney springs immediately to mind) there is a very wide range of artists repesented, encompassing both celebrated watercolorists like  J.M.W. Turner, William Blake and Paul Nash together with contemporary artists who are not primarily thought of as working with watercolour, including Anish Kapoor, Andy Goldsworthy and Tracy Emin. A central portion of the exhibition also explores the mechanics of how watercolour painting works, and the techniques that have been used by artists over the ages: small vitrines display all the paraphenalia of painting, inviting us to peer at dirty paintboxes, half-empty tubes of paint, smeared palettes and even Turner’s paintbox.

The curators of this well thought out exhibition have evidently done their utmost to avoid clichés, and offer a genuinely different take on a medium that is often written off as being simply ‘accessible’, safe and dull. But whilst there’s no doubt that this exhibition convincingly demonstrates the range and versatility of watercolour as a medium, proving that it can pack a powerful punch, at times the pace feels a little too hectic, the scope a little too wide, and there seems to be something oddly lacking.

Ultimately, for me however, the strength of this ambitious show is all in the power of the individual works that catch your eye (for me it was Patrick Heron and Howard Hodgkin, but for someone else it would doubtless be different) and stop you in your tracks, which really make you think again.