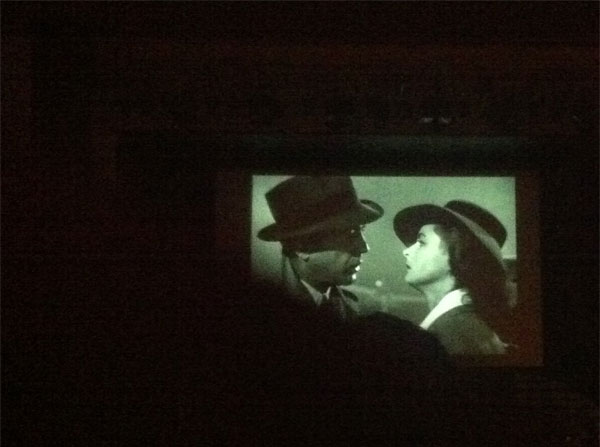 Casablanca has been my favourite film since forever, so clearly I couldn’t resist Future Cinema‘s latest extravaganza, which sees the Troxy  in Limehouse transformed as if by magic into Rick’s Café Américan.

I’d never been to a Future Cinema event before and having heard tales of their most recent Shawshank Redemption themed event, I had to admit to feeling a bit unsure about what I was getting myself into. The fun begins as soon as you book your tickets and receive your instructions and ‘papers’ complete with your new identity for the occasion – I became Gabriela Ostrowska of Italy for the evening. Arriving at the Troxy, the queue was full of people decked out in impressive 1940s finery, clutching their papers for inspection, whilst members of the Moroccan police shouted out orders, and various shady characters lurked in the shadows or struck up conversations with those waiting in line.

Once inside the theatre, however, there were champagne cocktails, swinging music from Benoit Viellefon and his Orchestra, roulette tables and Moroccan food from Moro. The music was fantastic and I enjoyed the chance to practice my (pretty woeful) swing dance steps on the dance floor, but even more fun for me was spotting the various characters from the film as they appeared amongst us: from Major Strasser and his fellow Nazi officers striding about, to Senor Ferrari, complete with fez and fly-swat, chatting with guests; from Sam leading a rousing chorus of ‘Knock on Wood’, to Rick himself coolly playing chess in the corner. There was plenty going on around us: the police hauling off anyone who looked like a ‘suspicious character’, much hushed talk of exit visas, and of course, the arrival of Ilsa and Laszlo to look out for.

My highlight of the evening, however, was singing the Marseillaise in a recreation of my favourite scene from the film – I’ll admit to having been a little disappointed that most of the audience didn’t seem to share quite the same level of enthusiasm for joining in (but perhaps unlike me they hadn’t got the words ready in advance, ahem…).

Finally came the opportunity to watch the film itself, with every ‘Here’s looking at you, kid,’ getting a big cheer from the audience. Even though I must have seen it dozens of times, it was just as brilliant as ever, and I still teared up at the final scenes, as Laszlo tells Rick, ‘Welcome back to the fight. This time I know our side will win.’

At the very end of the evening we were granted our exit visas assuring us safe passage to Lisbon. Sadly it was time to leave Casablanca behind us and head back out into the cold and wet East London night… 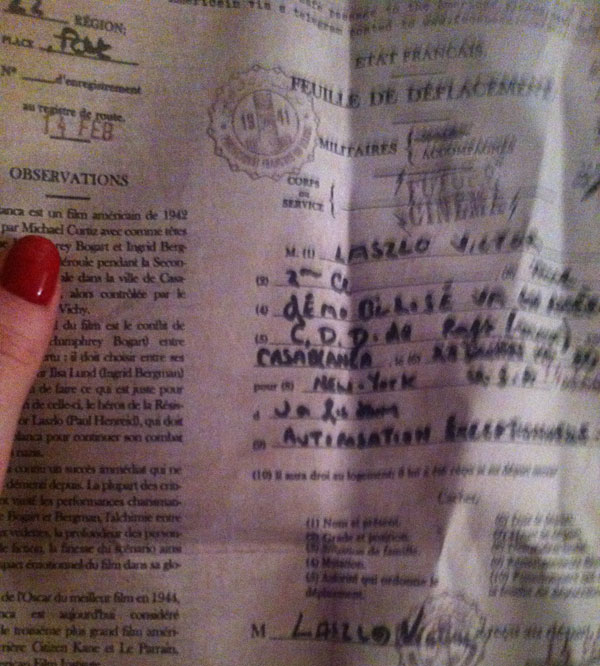