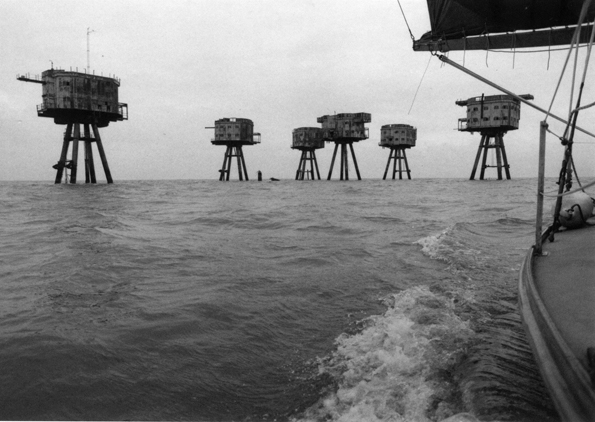 From Thames Film by William Raban

After a day out in the sunshine in Greenwich yesterday, we stopped off in Canary Wharf on the way home to visit the Museum of London Docklands.

Their latest exhibition, Estuary, takes its inspiration from the Thames Estuary itself: ‘a place both specific and vague… a largely overlooked landscape’ that ‘has provided inspiration for many artists and writers, among them JMW Turner, John Constable, Charles Dickens, Joseph Conrad and T S Eliot’. The show brings together a varied selection of work by contemporary artists exploring the estuary, its landscapes and its history, through painting, photography, printmaking and film installation.

For me, it was Michael Andrews’ paintings that immediately stood out – an homage to Turner and Whistler, beautifully painted in a palette of soft browns, greys, greens and blues that perfectly captures the colours of the shore landscape. Further on, Christine Baumgartner’s ghostly prints of rusting old ships create an intriguing contrast with Simon Roberts’ photograph of a deserted Southend Pier, which combines the gaudy fun of seaside nostalgia with a surreal, somewhat spooky sense of emptiness.

Stephen Turner’s Seafort Project, which aims to capture the artist’s experience of taking up residence alone in a derelict seafort on the Shivering Sands, resonated with me less – but I was fascinated by the idea of the seaforts themselves which recurred in a couple of other works in the exhibition. These hulking structures, on stilts raising them high above the water, were built as a defence against German aircraft during the Second World War, but now lie abandoned and rusting – see the image above from Thames Film by Michael Raban.

I also loved The Bow Gamelan Ensemble’s short film, which shows the three artists (performance artist Anne Bean, percussionist Paul Burwell and sculptor Richard Wilson) playing makeshift instruments in and around a group of abandoned concrete barges, whilst the tide slowly rises to submerge them. There are a number of interesting video works in the exhibition, including  Andrew Kotting’s Jaunt, and John Smith’s Horizon (Five Pounds a Belgian), which combines a number of apparently images of the sea and the horizon to create a strangely spellbinding short film.

Thoughtfully put together, this exhibition cleverly conjures up the smell of saltwater and the cry of seagulls, offering both familiar and new perspectives on the river. Taking us on a tour of industrial estates and seaside resorts, mudflats and saltmarshes, seaforts and shipwrecks, Estuary is a portrait of an intriguing landscape – forgotten, solitary, bleak but unexpectedly beautiful.