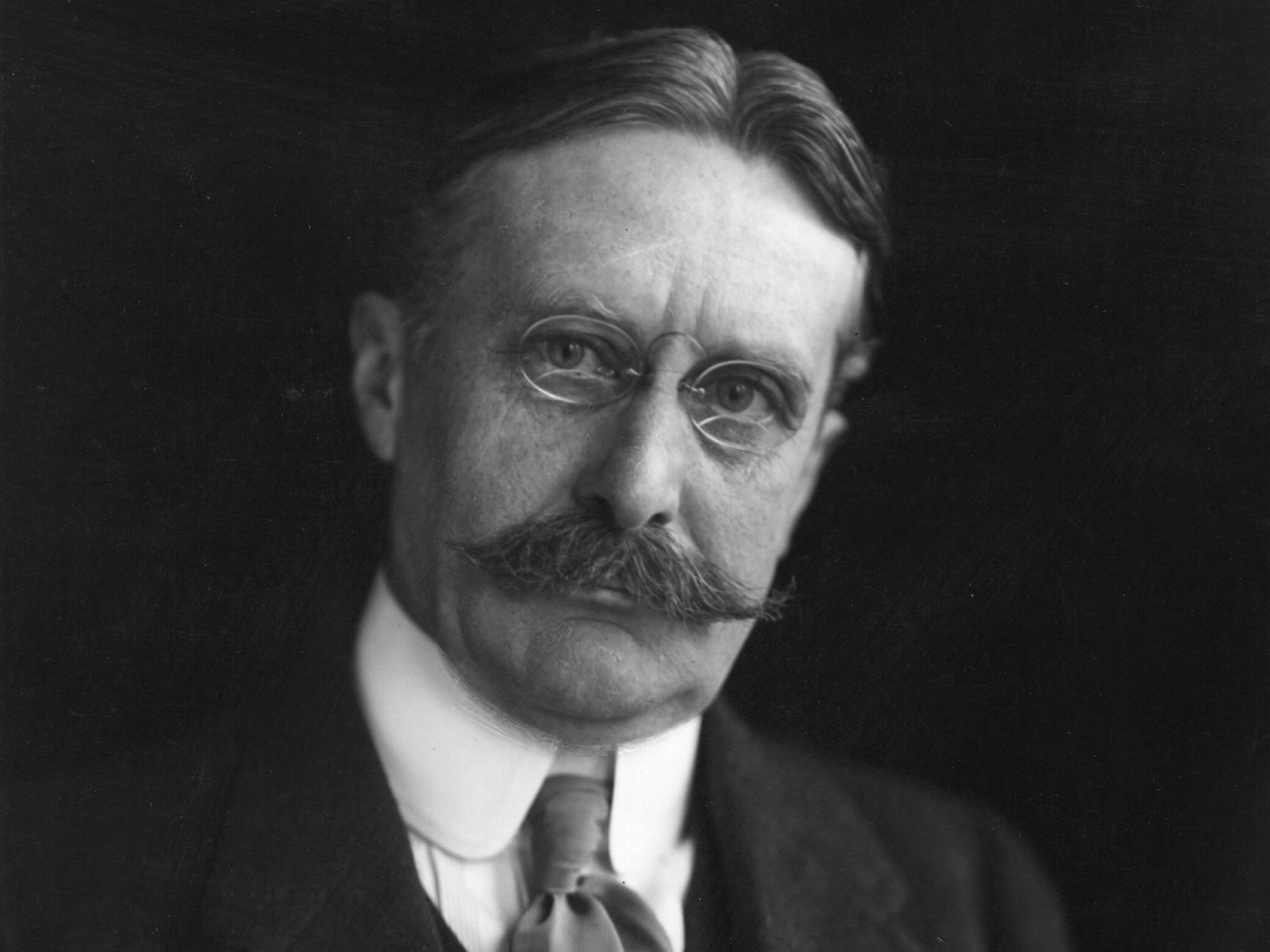 Following my previous ‘Behind the Scenes’ post about how real-life 1900s department stores helped to inspire Sinclair’s in The Mystery of the Clockwork Sparrow, I wanted to write a bit more specifically about one of the most famous of the Edwardian department stores – Selfridges, and in particular its owner, Harry Gordon Selfridge.

Like my own fictional department store-owner Mr Sinclair, Selfridge was an American. Born in Wisconsin in 1856, he left school at 14, first finding work as a junior book-keeper in a bank. He had several other jobs before aged 22, he took on a position at Marshall Field, then one of Chicago’s biggest and most successful new department stores.

Selfridge’s initial position at the store couldn’t have been much lowlier – he was employed as a ‘stock boy’ working in the wholesale department. But his energy and ambition led him to quickly climb the ladder, bringing lots of new ideas to help the store to grow and thrive. Within eight years he was promoted to manager, gaining a reputation for clever innovation, a flair for publicity, and the highest standards of customer service. In fact, whilst working at Marshall Field, he is supposed to have come up with the maxim ‘the customer is always right’. 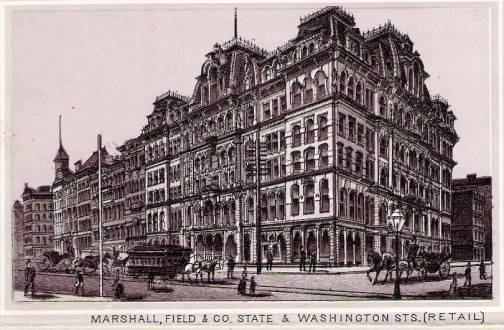 Before long ‘mile-a-minute Harry’ as he had become known had risen through the ranks, and had become a junior partner. He revelled in his new wealth and status, enjoying dressing elegantly and living the life of a Chicago society gentleman.

In 1890, he married Rose Buckingham, the daughter of a prominent Chicago family. Rose too had a head for business, having already enjoyed some success as a property developer – at that time unusual for a young woman. The couple had a spectacular wedding, and went on to have five children.

But after being refused a full partnership at Marshall Field, Selfridge began to look beyond Chicago. A holiday to London had given him the opportunity to observe a gap in the market –  although London was at that time one of the most important cities in the world, its department stores had nothing to compare to their luxurious American equivalents, or to the elegant grand magasins of Paris.

After finding a site on Oxford Street, at what was then considered the ‘unfashionable end’, Selfridge invested some £400,000 in developing it. The costs of his project were huge, and there were all kinds of complications to overcome before his dream of opening London’s largest department store could become a reality – but at last, Selfridges opened in March 1909, in a blaze of publicity. 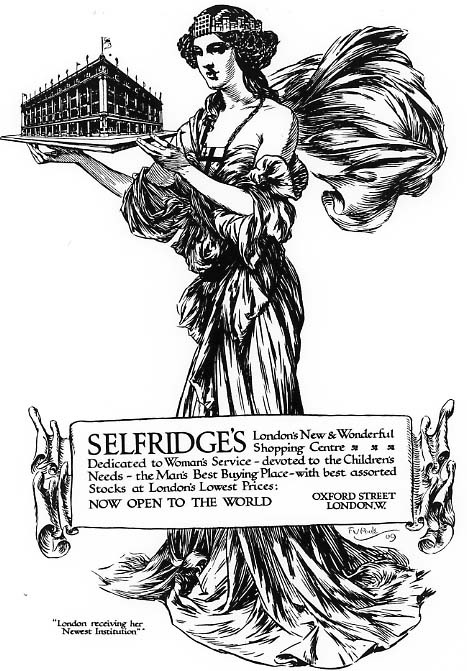 A newspaper advertisement from Selfridges opening in 1909

Meanwhile, Selfridge himself had become something of a celebrity in London. When he arrived at the store each morning – always very promptly at 8.30am – a crowd would have gathered on the pavement to see him. He always doffed his hat to his watching admirers.

He had a large corner office on the fourth floor of the store, with its own lift and a private dining room where he could entertain important guests. As well as a personal secretary, he had his own social secretary and a valet who would visit him in his office each morning to make sure he was always perfectly dressed.

Each day he would walk the store’s six acres. The department managers would anxiously telephone ahead to warn staff that he was approaching. He sent messages to his staff in special yellow envelopes – and he also famously used an hourglass in all his meetings, to stop people taking up too much of his time. 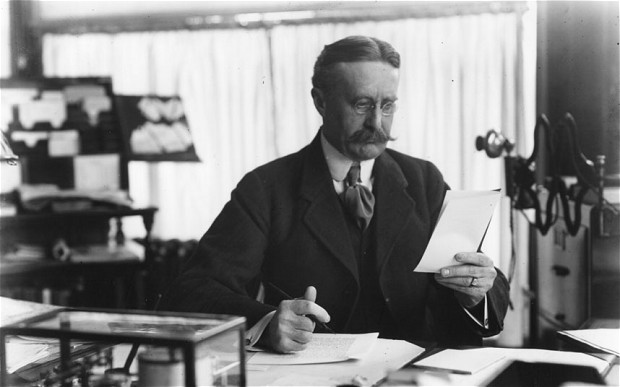 He also continued to bring all kinds of new ideas to his store – from exhibiting the aeroplane in which Louis Bleriot first crossed the Channel, to later on in 1925, hosting one of the first ever demonstrations of live television.

Selfridge captured some of his ideas about shops and shopping in a book, The Romance of Commerce which was published in 1918. The book included chapters exploring ancient commerce, Lorenzo de Medici, the East India company, and much more!

Flush with his success, Selfridge enjoyed a glamorous London life in the 1910s and 1920s. But in the later years of his life, his extravagance began to catch up with him. After losing much of his fortune in the Great Depression, and struggling to compromise on his luxurious lifestyle, he soon became heavily in debt. He was eventually forced out of Selfridges in 1941 on a reduced pension – and when he died just six years later, he was almost destitute.

His intriguing life story has since inspired a biography – Lindy Woodhead’s Shopping, Seduction and Mr Selfridge which I mentioned in my last post – and a TV series as well. (I can’t help thinking that their version of Mr Selfridge looks a little different from the real-life man himself, pictured above!) 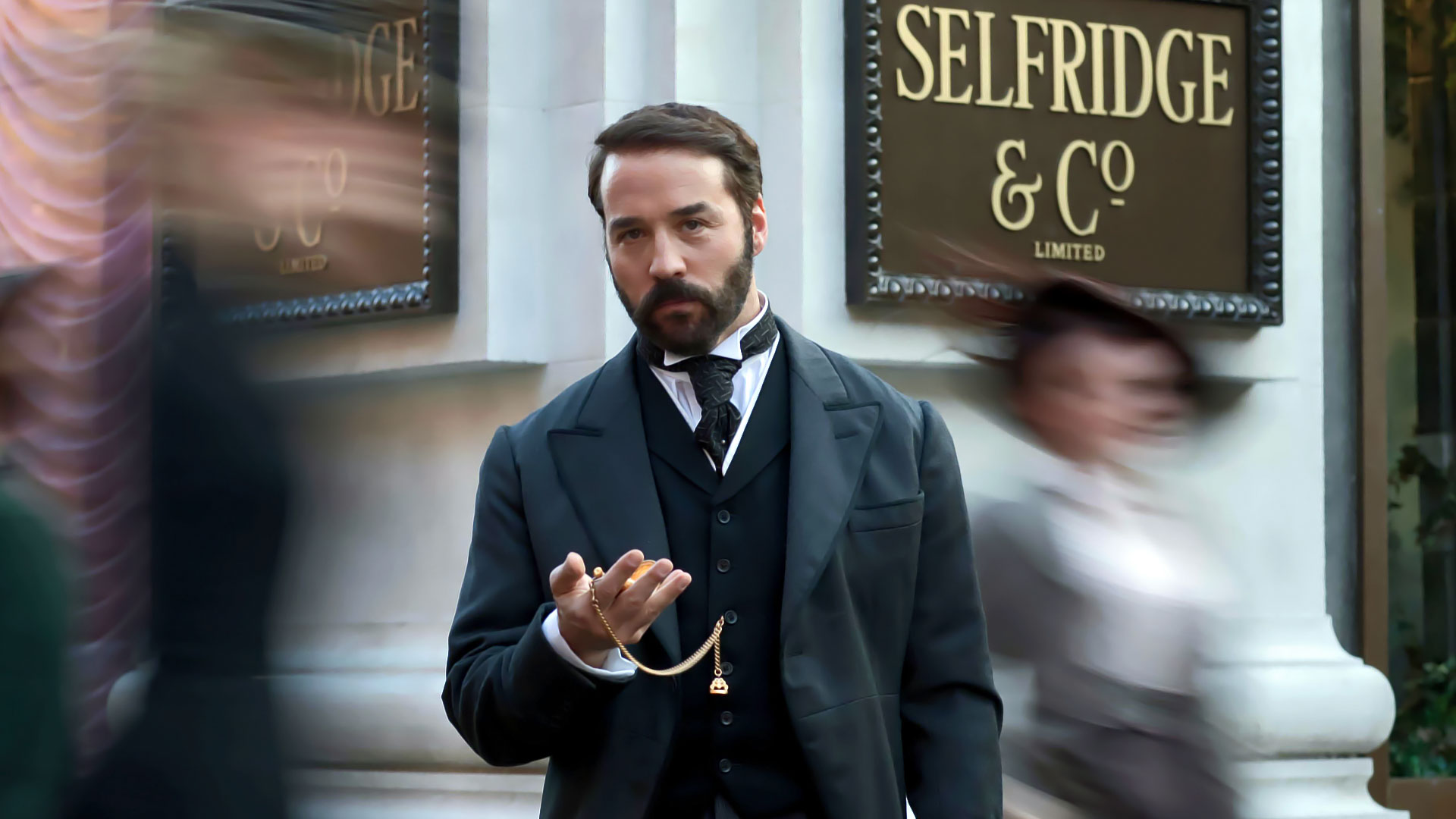 Jeremy Piven as Mr Selfridge in the ITV series

And of course, Selfridge also helped to inspire The Mystery of the Clockwork Sparrow.  I was fascinated by the story of this charismatic character, who was often in my mind when I was creating my own fictional department store-owner, Edward Sinclair.

Although he’s also a wealthy American, Mr Sinclair ended up being quite a different character to the real-life Selfridge. He’s a younger, single man-about-town who lives in elegant apartments over the store, whose unknown past is much speculated upon by his employees – and who is always a little bit of a mystery…

But I did enjoy giving my Mr Sinclair a few of Mr Selfridge’s idiosyncracies. For example, Selfridge famously loved pug dogs – so I’ve given Mr Sinclair his very own pet pug, Lucky. And just like Mr Selfridge, Sinclair wears an orchid in his buttonhole and takes great pride in being immaculately dressed at all times.

Here’s where we first hear about Mr Sinclair, in Chapter 1 of The Mystery of the Clockwork Sparrow:

The owner of Sinclair’s department store was Mr Edward Sinclair, who was as famous as the store itself. He was an American, a self-made man, renowned for his elegance, for the single, perfect orchid he always wore in his buttonhole, for the ever-changing string of beautiful ladies on his arm, and most of all for his wealth. Although most of them had only been working for him for a few weeks, and most of them had barely set eyes on him, the staff of Sinclair’s had taken to referring to him as ‘the Captain’ because rumour had it that he had  run away to sea in his youth. There were already a great number of rumours about Edward Sinclair. But whether or not the stories were true, it seemed like an apt nickname. After all, the store itself was a little like a ship: as glittering and luxurious as an ocean liner, ready to carry its customers proudly on a journey to an exotic new land.

Will we learn more about the mysterious Mr Sinclair (and his secrets)? You’ll have to wait for next year’s The Mystery of the Jewelled Moth to find out…