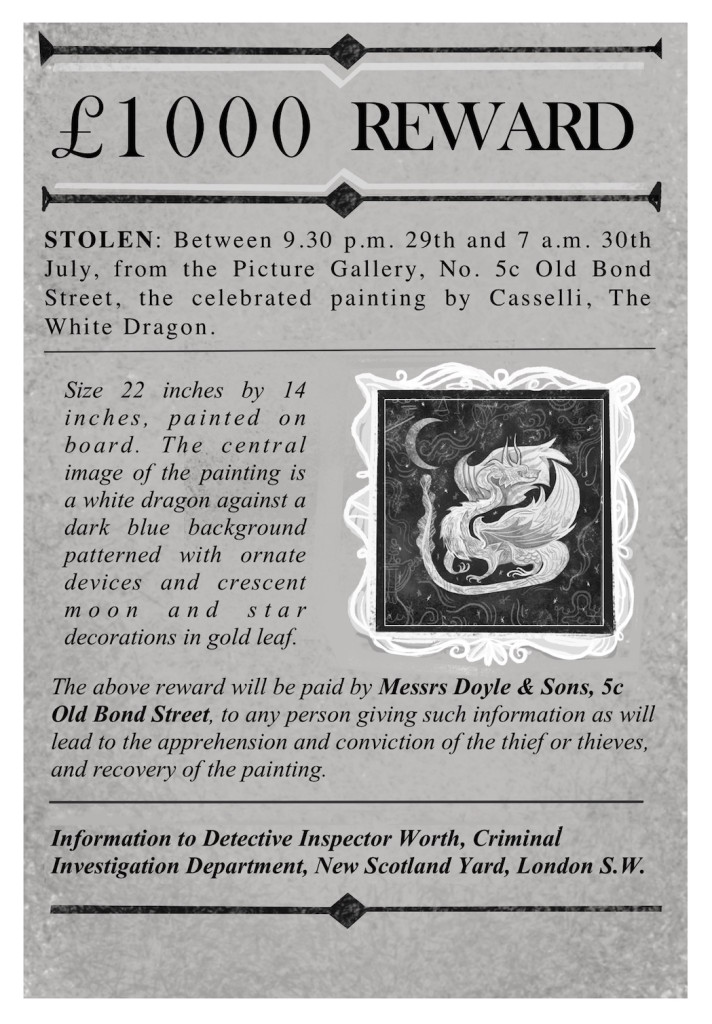 Illustration from The Painted Dragon by Karl James Mountford

When I started writing The Painted Dragon, I knew that I wanted the story to centre on an art theft. Mysterious stolen paintings are a classic crime trope, appearing everywhere from episodes of ‘Jonathan Creek’, through to Donna Tartt’s Pulitzer Prize winning novel The Goldfinch!

What’s more, a little research soon showed me that there were some fascinating real-life art thefts that took place during the late Victorian and Edwardian period. Here are two of my favourite examples: 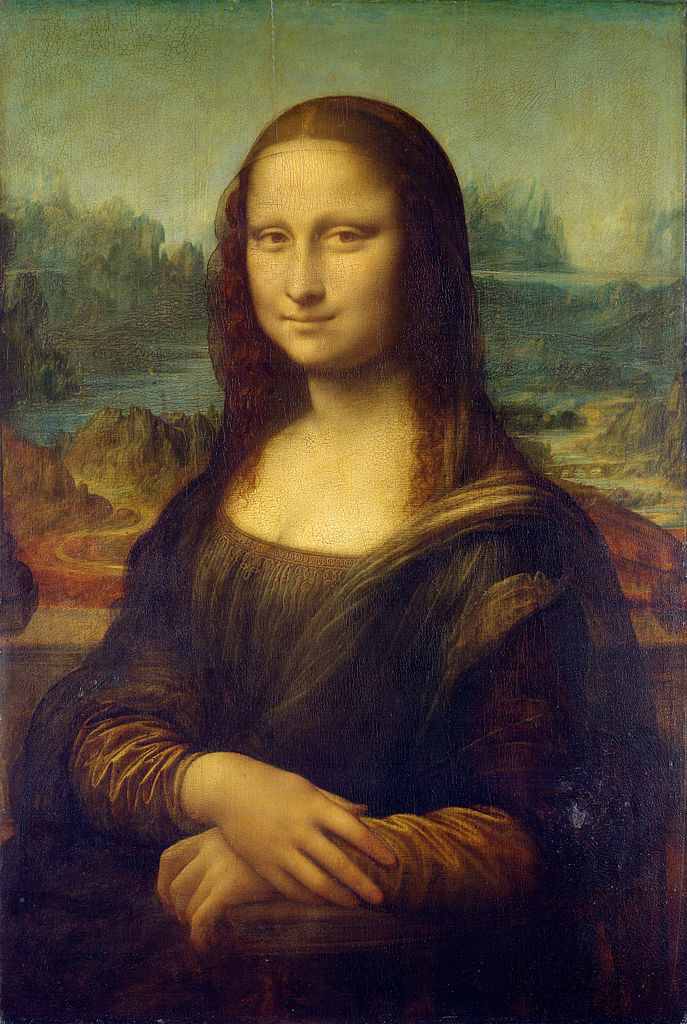 The theft of Leonardo da Vinci’s Mona Lisa from the Louvre by Vincenzo Peruggia in 1911 has been described as ‘the greatest art theft of the 20th century.’

A former employee of the Louvre, Peruggia reportedly entered the museum first thing in the morning amongst a crowd of workers, disguising himself in the same white smock the workers always wore. Waiting until the Salon Carré, where the Mona Lisa hung, was completely empty, he lifted the painting off the wall, and took it to a nearby service staircase where he removed its protective case and frame, before sneaking it out of the building.

Peruggia hid the painting in a trunk in his Paris apartment for two years, whilst the police investigated the crime. Amongst the many people they questioned were the artist Pablo Picasso. They even questioned Peruggia himself, but accepted his explanation that he had been working elsewhere on the day of the robbery. Meanwhile, in the Louvre, art lovers left bouquets of flowers against the bare wall, where The Mona Lisa had once hung.

Peruggia was finally caught in 1913, after he took the painting back to his home country of Italy. There, he contacted Alfredo Geri, the owner of a Florence art gallery, and told him that The Mona Lisa was in his possesion. After ‘authenticating’ the painting (to check it was real and not a forgery), Geri at once informed the police – and Peruggia was arrested.

There was a frenzy of delight when The Mona Lisa was found. Geri was awarded the rosette of the Légion d’Honneur by the French state, and exhibitions were organised all around Italy with great fanfare. Italian children even got the day off school to go to Florence to admire the rescued painting. Finally, at the end of December, the painting was transported back to Paris in its own special railway carriage. Whenever it passed through a station, people would gather to cheer and wave!

To this day, no one is absolutely certain why Peruggia decided to steal the painting. Some think it was for patriotic reasons: Peruggia believed the painting had been stolen from Italy by Napoleon (although in fact, Leonardo da Vinci had given the painting as a gift to the French king Francis I, 250 years before Napoleon’s birth!) and wanted to return it to its homeland. Others believe that it was con-man Eduardo de Valfierno who had masterminded the crime, with the aim of commissioning a forger to make copies of the painting, which he could then sell as the missing original. But whatever is the truth about Peruggia’s motives, there’s no doubt that the theft helped make The Mona Lisa more famous – and enigmatic – than ever.

The Duchess of Devonshire

One of the most fascinating art crimes I found out about during my research for The Painted Dragon was the theft of Gainsborough’s painting The Duchess of Devonshire . 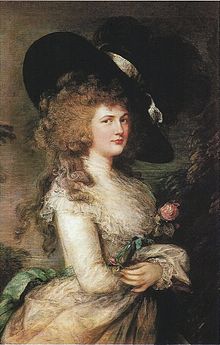 In 1876, the recently rediscovered portrait had been sold to art dealer William Agnew at auction for the astronomical sum of 10,000 guineas –  then the highest price ever paid for a painting at auction. The auction created a frenzy of interest around the painting, and when it was put on display at Agnew’s Bond Street gallery it drew big crowds of people, who all wanted to see this priceless portrait for themselves. But just a few short weeks after the painting went on display, Agnew’s gallery was broken into – and The Duchess of Devonshire was stolen!

The theft provoked a great deal of media attention, and the gallery was soon flooded with letters and telegrams from people all over the country, who either claimed to have spotted the painting, or had their own wild theories about how the theft might have taken place, and how Agnew could get the painting back.

The mysterious theft made the portrait itself even more famous. The Duchess of Devonshire herself became a fashion icon, and the painting had a huge influence on the styles of the day – with ostrich-feather ‘Gainsborough hats’ becoming all the rage in both London and New York.

Amazingly, the painting wasn’t seen again for 25 years, when the truth about what had happened to The Duchess of Devonshire was finally revealed. The painting had in fact been stolen by Victorian master thief, ‘the Napoleon of Crime’ himself, Adam Worth.

Initially, Worth had stolen the painting in order to raise bail to release his brother from prison. But when his brother was unexpectedly freed without bail, Worth decided to keep the painting ‘for a rainy day’. At this time he was posing as Henry J Raymond, a wealthy and highly respectable American gentleman. At his fashionable residence on Piccadilly, he kept the painting carefully pinned under the mattress of his four-poster bed. Later, he had a trunk made with a false bottom which allowed him to conceal the painting (along with other spoils, such as stolen diamonds) on his journey back to the United States. So began what Ben MacIntyre in his book about Worth, The Napoleon of Crime describes as ‘a strange, true Victorian love-affair between a crook and a canvas’.

It’s certainly true that Worth seems to have felt a strong desire to keep hold of The Duchess of Devonshire. For many years, he kept the portrait carefully hidden in a Brooklyn warehouse – and even when a robbery went wrong, and he was arrested and sent to prison in Belgium, he never tried to sell the painting, nor revealed its whereabouts to anyone.

In fact, it wasn’t until several years after his release from prison, in early 1901, that he finally negotiated a return of the painting to the Agnews (via the famous American detective agency Pinkerton’s) for the sum of $25,000. The portrait and payment were exchanged in Chicago in March 1901, and shortly afterwards the The Duchess of Devonshire arrived back in London, and was immediately put up for sale. Wall Street financier JP Morgan quickly snapped it up for a reported $150,000.

Adam Worth himself is such a fascinating figure that I’ll save writing more about him for another blog post. But you might like to know that after belonging to the Morgan family for most of the 20th century, today The Duchess of Devonshire has at last made her way back home to Chatsworth House, home of the Devonshire family.

The theft of The Green Dragon, the priceless painting that is stolen in The Painted Dragon, ended up being rather different to the real-life theft of either The Mona Lisa or The Duchess of Devonshire – featuring a forged painting, a locked-room mystery, and a mysterious criminal in red leather gloves. However, there’s no doubt that these real-life Edwardian art crimes had an important part to play in helping to inspire the story.  If you would like to read a bit more about art thefts there are some fascinating books on the subject: I’d particularly recommend The Napoleon of Crime as mentioned above.