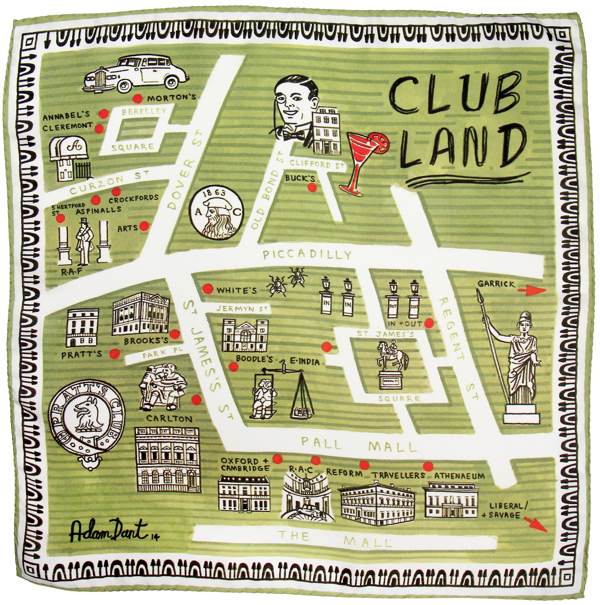 Most well-off gentlemen would belong to at least one – or possibly several – of these exclusive establishments. Gentlemen’s clubs had become popular in the 19th century, and by 1909, when the Sinclair’s Mysteries are set, there were around 200 of them in London. Most were situated in the St James St/Pall Mall area of the West End, which was known as ‘Clubland’ – see above. (In The Painted Dragon I’ve departed from tradition by instead positioning Wyvern House in the City of London, close to the Bank of England; however, Mr Pendleton’s club which also makes a brief appearance towards the end of the book, is situated in the heart of Clubland.)

Each club was usually aimed at a specific group of gentlemen, who might share a political affiliation, a profession, or a particular interest. Some were military clubs, others for those who had studied at a particular university, whilst some were purely social clubs. Some of the most famous Edwardian clubs included The Athenaeum (founded in 1824, ‘for men of science, literature and art’), The Reform (founded in 1836, for those who supported the Reform Bill), Brook’s (for Liberals) and the Marlborough (formed by Edward VII when he was Prince of Wales). There was even the Travellers’ Club, founded in 1819 for men who had travelled a minimum of 500 miles outside the British Isles.

The oldest and arguably most exclusive club was White’s, founded in 1693. It began life as a hot chocolate emporium, but later became a gentleman’s club, and by the 18th century, it had gained a reputation for gambling. The club kept an infamous ‘betting book’ recording its members’ personal bets on everything from political events to marriages. One of the most famous bets it recorded was Lord Alvanley’s 1816 bet of £3,000 that a particular raindrop would chase its way down the club’s famous bow window, before another! It’s even rumoured that a man once collapsed outside the club’s front doors, and bets were immediately placed on his chances of survival. (White’s, like several of the most famous Edwardian gentlemen’s clubs is still in existence today – and its current members include Prince Charles and Prince William.)

Each of the clubs had different rules and regulations, and different atmospheres. Some were serious and silent, whilst others were much more raucous, and the scene of gossip and scandal. Either way, wealthy gentlemen would usually spend a lot of their time at their club, eating, drinking, playing cards or billiards, and relaxing with their fellow members. Many clubs even had bedrooms which the members could use, and some gentlemen might live at their club for weeks at a time!

Just like in The Painted Dragon, women were not permitted to enter these Edwardian gentlemen’s clubs, which were very much masculine spaces.However, by the late 1890s, a small number of clubs, including the Abermarle, did admit both ladies and gentlemen. What’s more, some clubs for women were beginning to spring up. The first was the Somerville Club, founded in 1879, for graduates of the college; whilst the high society Alexandra Club (1884) required its members to attend Court Drawing Rooms. The Victoria, established in 1894, was ultra-exclusive and provided dining rooms, reading rooms, drawing rooms, and bed chambers for its members, accommodating ladies for up to a fortnight at a time. By 1899 there were nearly 25 clubs in London catering specifically for women. I wonder if Sophie and Lil might even have become members of one of them?

The wonderful map of Clubland at the top of this post is by artist Adam Dant and is actually a silk pocket square designed for Drakes Of London! Find out more information here on the website Spitalfields Life.