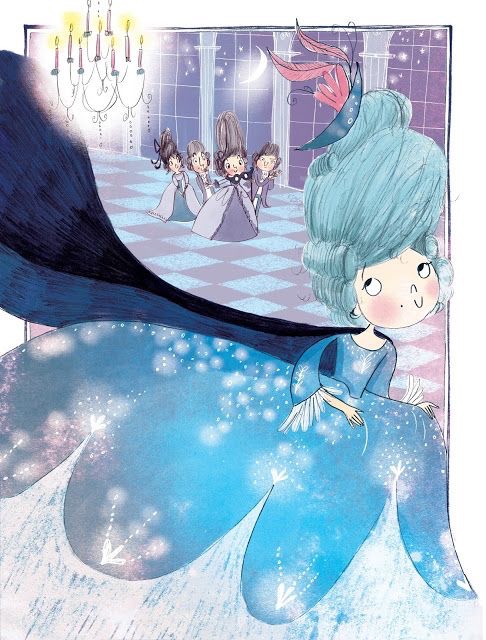 The last year has seen an explosion of brilliant new children’s books telling the stories of women from history – from the bestselling Good Night Stories for Rebel Girls to books about women in space, in sport and in science. It’s been brilliant to see these books shine a spotlight on women’s achievements – and I’m delighted that this month, my own book based on the life of an inspiring female figure from history will join them. Rose’s Dress of Dreams is published by Barrington Stoke as part of their super-readable Little Gems series, with gorgeous illustrations from Kate Pankhurst – herself the creator of the Fantastically Great Women picture books, introducing young readers to heroines of history from Amelia Earhart to Rosa Parks.

The real-life female figure who inspired Rose’s Dress of Dreams is perhaps a little different – and her name is certainly less well-known, although there’s no doubt that she continues to exert a huge influence on her field today. Rose Bertin is often described as the world’s first fashion designer, and the inventor of haute couture as we know it. From humble beginnings, she had a meteoric rise to become France’s most famous dressmaker, and a member of Marie Antoinette’s inner circle. Her incredible designs have influenced contemporary designers including the likes of Vivienne Westwood, John Galliano and Karl Lagerfeld.

As a writer of historical fiction for children, I’ve always got an eye out for interesting characters and stories from history, and the idea of writing about Rose Bertin first came from an anecdote I heard about an occasion early in her career when she mistook a princess for a maid. This sweet story of mistaken identities seemed like a fun starting point for a children’s story – but as I discovered more about Bertin’s life, I became increasingly fascinated by this story of an ambitious young businesswoman with an immense talent for fashion, who became one of the most important figures of the French Court.

Born in 1747, Bertin moved to Paris at a young age, where she was apprenticed to a milliner. She excelled at her work, and was quickly promoted to partner, before moving on to open her own dress shop, where she employed 30 women. Already very popular with the ladies of the court, she soon began dressing the young Queen of France, Marie Antoinette.

Bertin’s bold designs helped the queen make an immediate sensation – and she rapidly became not only her favourite dressmaker, but an intimate friend. Together, they understood the political power of fashion: the enormous skirts of Bertin’s magnificent dresses transformed the teenage queen into an imposing figure at the Royal Court. The towering hairstyles Bertin designed for her, with the help of coiffeur Leonard Autie, made her an even more formidable presence: measuring up to three feet tall, they were often decorated with objects relating to important current events such as the American Revolutionary War.

Soon Bertin had her own workshop at Versailles, and she and the queen met several times a week to discuss her designs, which she frequently compared to masterpieces in art. Her outfits set trends not only in France, but all around Europe: dolls dressed in miniature versions of her designs were sent to foreign courts to help them keep up with the latest styles. Bertin soon became known as the queen’s ‘Minister for Fashion’ and a powerful figure in Royal circles – this at a time when women very rarely wielded any influence in politics. What was more, Bertin was a commoner, making her important position at Court even more remarkable.

In fact, Bertin was not the only prominent professional woman in the circle around Marie Antoinette – which also included the likes of portrait painter Elisabeth Vigée Le Brun. In this context, it’s especially interesting that in 1776 Bertin was granted Royal permission to head up a new and largely female guild of milliners, feather-sellers and flower-peddlers, quite separate from the established male-dominated mercers guild, which would help to give working women more power.

But of course, the days of rococo splendour at the French Court were numbered. The Revolution was just around the corner; both the queen and her lavish wardrobe were increasingly criticised; and pamphlets denounced Bertin herself as ‘a corrupt and corrupting merchant of luxury’. Soon the Royal family were placed under house arrest, but still Bertin remained a loyal friend, supplying Marie Antoinette with clothes including a mourning outfit for her to wear after the execution of Louis XVI. At her own execution, Marie Antoinette reportedly wore a lace cap Bertin had made for her.

Today, Marie Antoinette’s wardrobe has been endlessly discussed and criticised – but regardless of the role fashion may have played in the queen’s downfall, I was excited to shine a light on the story of her amazing dressmaker. Rose’s Dress of Dreams is a celebration of the joy of fashion, but also of a young woman of huge artistic talent, who made history with her passion, determination and limitless imagination. Rose Bertin was a true trailblazer – and I hope this story will help her to find a deserved place amongst the historical heroines that are currently inspiring the next generation.